MAP22: Prison Escape is the twenty-second map of Congestion 1024. It was designed by Kimmo Kumpulainen (Jimi) and uses the music track " ". 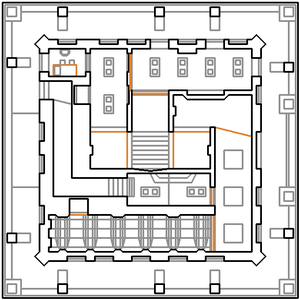 Map of Prison Escape
Letters in italics refer to marked spots on the map. Sector numbers in boldface are secrets which count toward the end-of-level tally.

At the start, turn around and the door in front will open automatically. Go through it and ride two lifts down: the first one to your right, and the other one in front of you as you exit the first one. Turn left, make a hairpin turn to the right and move past the unmarked red door to find a door. Enter the room, grab the blue key at the end and ride the previous lift up. Make a hairpin turn to the right, open the door and pick up the red key inside. Return to the unmarked red door seen earlier and go through it. Climb up the stairs, follow the dark corridor to the end and drop down to the ground. Follow the path as it circles around the prison and use the last door to exit the level.

* The vertex count without the effect of node building is 825.