MAP22: Quarry is the twenty-second map of PlayStation Final Doom, and the ninth map of the TNT episode. It is based on the PC version of MAP24: Quarry from TNT: Evilution, with modifications to accommodate the PlayStation's framerate and memory limitations and add enhancements such as colored lighting. It uses the music track "Beyond Fear".

The author of the original level was Dean Johnson. Changes for the PlayStation port were authored by Tim Heydelaar.[1] 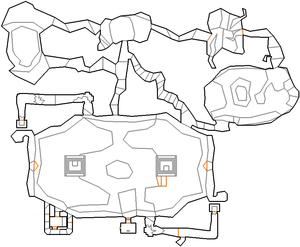 In the starting room, turn round and go through the west tunnel. When you reach a white cave, turn left and go south until you reach an outdoor area. Pass the lava pool and go south-east into a tunnel with lava. Quickly follow the tunnel until you see a teleporter lower in front of you and step into it. You will be sent to the eastern tower in the outdoor area - when the floor rises, take the blue keycard in front of you.

Drop off the tower to the second floor of the outdoor area, and head to the blue door in the south wall of the area. Press the switch inside to finish the level.

An invulnerability powerup can be found in the eastern cavern, on the west platform. To reach it, start from the north cavern and leave through the south exit, then go south-west up a staircase. At the end, drop down to a red ledge and then run forward to collect the powerup.

In the same cavern, after dropping down to the ledge along the south wall, you can walk east along the ledge to find a box of shells and a box of rockets.

Some monsters will never spawn on this level either due to having Deathmatch-only flag set or simply lacking difficulty options: