MAP22: Rolling Stones Collect No Moss is the twenty-second map of 32in24-5, a deathmatch megawad. It was designed by Andrew Wood (Catoptromancy) and Tango, and uses the music track "Marble Corridor," originally composed by Soshiro Hokkai for Castlevania: Harmony of Dissonance. 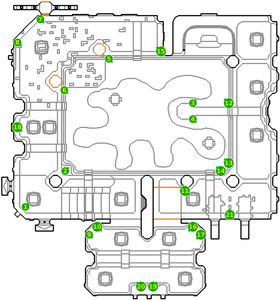 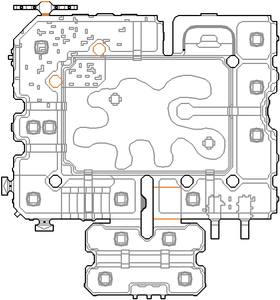 Despite having the most spawn locations of any map in 32in24-5, this map has a simple layout confined to a fairly average map size. The map's centre is dominated by an open courtyard, though only a box of bullets, box of shells and a berserk pack are available in terms of items here, as well as a backpack and a medikit in a small recess in the north-east corner.

Surrounding the courtyard is an elevated walkway, which is accessed from either stairs or a lift in the south of the map. The walkway is cutoff along the north and south sides, so the stairs only provide access to the western half, whilst the lift serves the eastern half. At the top of the stairs, players can walk along the protrusion that runs alongside the stairs to get the green armor. A rocket launcher is available from the north-west corner, as is the exit room which contains two medikits. The two pillars at the north-west corner are in fact platforms that can be lowered like lifts: the north one contains a energy cell pack, and the west one contains a megaarmor. At the end of this western half of the walkway, players can find a chaingun.

For the eastern half, a short catwalk branching off of the east side into the courtyard leads to a plasma gun. If players can make it to the end of this half of the walkway, they can take the BFG9000, from which they can drop down back into the courtyard.

An small additional room can be found south of the walkway's access points. It has a rocket launcher in its south-west corner, a chaingun in the south-east, and three stimpacks along the south edge.

This level contains twenty-one spawn points, all of which get a super shotgun on spawn:

* The vertex count without the effect of node building is 1864.