MAP22: Rubicon is the twenty-second map of Alien Vendetta. It was designed by Brad Spencer and uses the briefing music from Descent II's MIDI soundtrack. 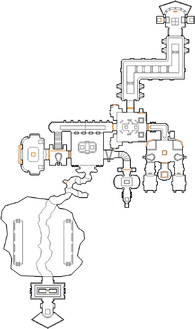 Map of Rubicon
Letters in italics refer to marked spots on the map. Sector numbers in boldface are secrets which count toward the end-of-level tally.

Grab the shotgun watching out for the demons here. Proceeding down the hall reveals two imps to your sides. You will enter a large room with a ledge to your right, a red door in front of you, and a blood river to your left. Go through the blood river which eventually becomes a rocky pathway, flanked by two marble structures containing mancubi. Do not fall down here as you cannot escape if you do. Make it to the other side and go around the marble structure to find a switch on it. Hit it and turn around to get the red skull key. Now you can go back and take the red door, which in turn will lead you up the stairs to the ledge. When you cross the stairs, you will inadvertently open a room to your west with a super shotgun. Should you need one, get it, but watch out for monsters who come in once you grab it. Go up the stairs and to the red door to the east to emerge in a library. Take out the enemies, then head through the northern door. At the end of this big hallway, press the switch to open a nearby teleporter. Take it and you will end up on a ledge back at the library. There are two switches here. Press the southern one, as the western one just reveals more monsters. Then go back through the big hallway. You may have to fight a cyberdemon, but make your way back through the big hallway to find the left teleporter is open. Again, it will teleport you onto a ledge in the library, the northwest ledge this time, and there are also two switches here. Hit the one on the west wall to lower the yellow skull key, as the one on the northern one just reveals monsters. Now enter the door on the east side and continue to the exit room. You need to press the switch on your left side first, then press the switch on your right which would now be open, to lower the blue key. Watch out for the monster ambush when you pick up the key, and look out for the duo of arch-viles guarding the exit behind the blue door.