MAP22: Sacrificial Castle is the twenty-second map of Doom 2 Unleashed. It was designed by aaglo and uses the music track "Infinite" by Tom Mustaine.

When using the music WAD included with this megawad, this level instead uses the music track "Cavern Castle" by Paul Corfiatis. 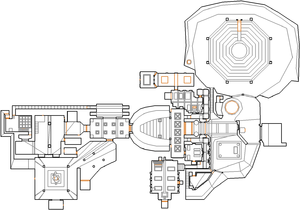 Map of Sacrificial Castle
Letters in italics refer to marked spots on the map. Sector, thing, and linedef numbers in boldface are secrets which count toward the end-of-level tally.

As the level starts, look at the wooden pillar on your left which holds a shotgun and ammo. Use the panel with a lion face to lower the pillar and collect the items, then go to the nearby marble well and look west to see a staircase. Next to the staircase is a smaller set of steps which you can follow down to a large wooden building. Go round the building past some imps until you reach its north side, then use the wood panel with skulls to lower it so you can go inside the building. Follow the stone path until you see a floor rise in front of you, which holds several demons guarding the yellow keycard. Take the keycard then use the skull panel again to get back outside.

Go back to the large staircase you saw earlier and climb it to the top, watching out for shotgun guys that are revealed through the windows on either side (plus imps on Ultra-Violence (UV) and Nightmare (NM) skill levels). At the top of the stairs, open the door (imps will be waiting behind it on Hurt Me Plenty (HMP) or higher) then pass through a second door which requires the yellow key. In front of you is a wide doorway with skull switches either side of it - press the switch on your left to lower a nearby lift, then step into the wall opening north of the door to get on the lift before it rises. Follow the passage past some shotgun guys until you reach a wooden door, then open it to find a room with imps and zombies.

Clear out the enemies then open the door in the north-west corner and kill any shotgun guys waiting behind it. Go through the door and step left to lower a platform with up to four cacodemons, then step on their platform to open a wall ahead and reveal a room filled with various monsters, including cacodemons and chaingunners on HMP and a baron of Hell on UV and NM. Kill all the monsters then open the gargoyle doors on either side and press the skull switch in the marble wall, then backtrack to the area past the yellow key door and press the switch north of the wide doorway which will lower a lift south of the door. Ride this lift up to a second passage with shotgun guys and follow it round to a room with a large organ in one corner. At the opposite end of the room are a baron and various zombies - kill them and take the blue keycard sitting on a step in the south-east corner.

Backtrack to the area past the yellow key door and head through the wide doorway, going down the steps to a door requiring the blue key. Open the door and kill the monsters waiting behind it then go through and take the rocket launcher, watching out for two walls that lower in the previous room to release several demons - you can close the blue key door behind you to shut them out. Go through the west door and (if needed) flip the switch on your left to turn on the lights in the next room, then head west through a doorway and be ready to kill some zombiemen that are revealed behind you and to the right. There is a computer panel in the north-east corner of the hall - flip the switch here to raise a set of stairs by the west wall, then climb up and press the switch next to the fence.

Go back down the stairs and go through the doorway on your right, then turn right to go through another door that has just opened. Go into the opening on the right then climb a gray staircase on your left to a landing with some lost souls, and open the skull panel in the north-west corner to find the red keycard sitting behind it. Take the key then backtrack to the room past the blue key door and open the south door this time, which requires the red key. Kill the baron and other monsters lurking in the darkness then head south-west into a square chamber with imps, as well as lost souls on HMP or higher. Press the gargoyle switch on the west wall to open a niche with one to three barons, then press a second switch inside this chamber to open the column in the middle of the chamber. Step into the hole under the column to finish the level.

Near the start of the level is a marble altar, and south-west of this is a small passage. Go into the passage and turn left to see a lion switch, which opens to reveal a chamber with a super shotgun and a partial invisibility.

From the above point, leave the chamber and turn left to climb a staircase. At the top, follow the ledge to a switch which will open the metal wall next to it then continue following the ledge to an armor and a box of shotgun shells.

After going through the yellow key door, turn left and open the door ahead on your left. Kill the monsters in the next room then open the south door to find a chaingun and a box of bullets.

Next to the closet containing the red key is a platform with a partial invisibility. Go down the stairs and turn left, then press the skull switch on the south wall to lower the platform for a few seconds.