MAP22: Sewer Slaughter is the twenty-second map of Hell Revealed II. It was designed by Yashar Garibzadeh and uses the music track "The Dark (techno mix)" by Sam Woodman. 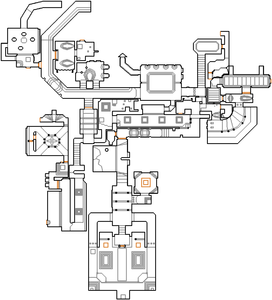 Map of Sewer Slaughter
Letters in italics refer to marked spots on the map. Sector, thing, and linedef numbers in boldface are secrets which count toward the end-of-level tally.

Through the passage, take out the arachnotron in the next room. Take whatever supplies you can here (there is a berserk pack to the northwest), then go through the sewer to the west. Take the first right to a small room where you can get the blue keycard. Although there is a blue door nearby, you cannot open it yet, so continue west through the sewer, to another blue door which you can open. Inside is a baron of Hell and a switch to flip. This one opens the other blue door, but not for long, so you have to be quick. Also watch out for imps who will keep teleporting into the sewer. Through the other blue door, you will find two paths, and the one to your right is blocked off for now, so take the left one. Inside, kill the barons of Hell, get the plasma gun, and head down the next long sewer to the other side. Again, two paths to take when you climb the steps out of the water, and the one on the right requires the yellow key, so hop the gap and take a left. Behind the mancubus is a switch, press it and climb the steps heading eastward. When you reach the next mancubus, take the door on the right. Here you will find pain elementals, and be on a bridge over nukage. Hit the switch at the east end to lower the bars, then follow the path which loops back around to the hall you had been in before.

The switch you pressed actually opens up the bars in the first fork, where you entered the second blue door. You should head back there, following the path behind it all the way to a door. Attempting to open the door reveals a large amount of enemies. Flip the switch in their compartment and the door will open, go through and kill the Hell knight. Hit the lion switch, but look out for revenants behind you, then open the next door. Get rid of the caged chaingunners in the next room. You need to remove two sets of bars to the northeast, so go both southwest and northwest for switches to remove those bars. Through the northeast passage, kill the arch-viles, then flip the switch. Kill some more, and now you need to return to the first blue door, the one you could open directly. Do so, and you will notice a new passage, leading into the room beyond the window. Get the yellow keycard in this room.

Now you need to make your way back to the second sewer, so do not forget about the switch that opened the second blue door. You might fight a flock of chaingunners along the way. On the other side of the second sewer, turn right at the steps and go westward. There are actually two red doors here, the one straight ahead allows you to get a soul sphere, which you might need for the upcoming rooms. Take the other yellow door, and follow it to a switch. After flipping it, you can access the side paths leading south into the big room here. Cross the bridge here and flip the switch on the other side, and then a large amount of enemies will teleport into the map. Kill all that you can, and then return to the hall with mancubi in it to find the east passage is open. Take out the imps, and then use the lift to obtain the red skull key. Now that you have it, return to the first sewer, and opposite of the first blue door is the red door. Enter and kill the arachnotrons and Hell knight inside, then flip the switch. Back at the big room with the arachnotron, a cyberdemon will be present, so kill him and go through the eastern passage which should be open. Just follow this passage until you reach the exit.

* The vertex count without the effect of node building is 2602.