MAP22: Soul Disruption is the twenty-second map of Whispers of Satan. It was designed by Kristian Aro, who also wrote the music track for this level, "The Demons from Shawn's Pen remix". 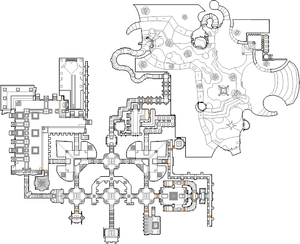 Map of Soul Disruption
Letters in italics refer to marked spots on the map. Sector, thing, and linedef numbers in boldface are secrets which count toward the end-of-level tally.

Head north from the start to the marble hallways until you reach the room with the armor, then turn right. Head through that hall and out into the outer yard taking the northern path to a lift. Press the blue skull to lower the lift and follow this hall to a door. Open it to find a room with a moat of dead bodies. Head to the southern side of this moat to climb some steps up to the next door. Behind it, follow the corridor to a room where you will find a switch with yellow bars around it. Hit it and then backtrack to the lift. Once you ride it back up to the outer yard, head due south from there as much as you can. If you did it right, you will end up in a room where you can go downstairs and the yellow skull key is available. Pick it up and leave the room.

Since these marble hallways where you start out in are horizontally symmetrical, as shown on the automap, head for the door that would be on the other end of the one you came out of. This one is on the western side, and has yellow skull markings indicating that it is a yellow door. Open it and kill the arch-vile and Hell knights inside. Get the rocket launcher inside and press the switch, then leave the room and through the open door on the left. Follow this passage to a lift and use it to go down. The next big area has blood all around it and the red key is behind a cage in this area. Imps will snipe at you from different areas and revenants are on platforms with switches on them. To progress, you must go to each revenant platform, triggering the switch to raise some blocks to keep going. Do this four times, and then run across the last set of blocks to the large skull switch. This switch opens up the red bars surrounding the key. Now to get to key, backtrack to the junction where the yellow door is to the south and go north, into the outer yard here. Take either lift going down and the key should be around the corner.

After getting the red key, ride back up to the marble hallways again and then head due eastward, towards the other outer yard where you found the switch that accessed the yellow key. Open the red door on the east side to find a long hallway. Go left here to the door and press the switch with the blue bar nearby. Go to the other end of the long hallway to find an opening to the right. Ignore it for now and keep going to the next door. Behind it is another switch with a blue bar, so hit it. Head back to the opening that you ignored earlier, and you can see the blue skull key that you need to get, but to do so, you need to climb the staircases that lead upwards and press two eye switches. The stairs are just before the blue key room, but after a room that holds some Hell knights. If you had not pressed the two switches with the blue bars on them, these stairs would be blocked off so be sure to press them. After you press both eye switches at the top of the stairs, the blue key becomes accessible.

Grab the key and head back to the marble hallways. There will be several monsters in this area, and they will be in front of the blue door that is to the north. Go through it and keep going down this path until you reach a large outdoor area. Kill the monsters here as you head for the southeastern part of this area, towards a ledge that has a skull switch. Press it, but watch out as a cyberdemon now appears in the area, as well as some demons. Head for the alcove that has several supplies, and head for the staircases just to the east of it. This area should be open after you have pressed the skull switch, so go here, and kill the shotgun guys and arch-vile guarding an eye switch. This switch raises a bridge across the blood leading northeast. Kill the last few enemies as you make your way to the exit.

South of the red key, you can enter a room with several monsters and a megaarmor.

The northern switch that has a blue bar around it has a side door. Inside is a baron of Hell and a soul sphere.

The large open field has an alcove to the north with several supplies.

A Hell knight (Thing 660) in the north has no flags set for any of the three difficulty classes, so it does not actually appear in the level. It was probably supposed to be set at Hey, not too rough and below, for at the same position is a baron of Hell at Hurt me plenty and higher.

* The vertex count without the effect of node building is 11109.