MAP22: Spiraling Into Nether is the twenty-second map of Valiant. It was designed by Paul DeBruyne (skillsaw) and uses the music track "Baron's Province" from Speed of Doom, composed by James Paddock (Jimmy). The par time is 5:30. 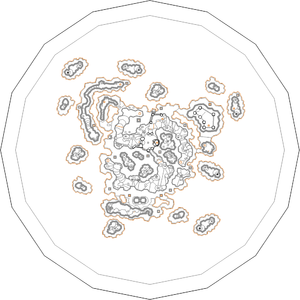 Map of Spiraling Into Nether
Letters in italics refer to marked spots on the map. Sector, thing, and linedef numbers in boldface are secrets which count toward the end-of-level tally.

Grab all the weapons and items around you, including a megasphere, then shoot the target switch on the south wall to open three archways around you. Each path leads to a different key - they can be collected in any order, but all three are needed to exit the level.

Go through the west archway and drop down to the floor below, then follow the path until you reach a radiation shielding suit - as you reach it, the path will fall into the lava below and you will come under attack from a large number of super demons, super spectres and suicide bombers - arachnorbs and cacodemons will also fly in from behind a high wall. Go to the west side of the pit to find some steps leading up to a teleporter guarded by two pyro knights, then enter it to get on a nearby ledge with super imps. Follow the ledge north and east to another teleporter which will take you to the red skull key. As you step off the key plinth, a teleporter leading back to dry land will lower in front of you; from here you can walk east to find a lift leading back to the starting point.

Go through the north archway and kill an arachnotron on the ledge ahead, then drop down to the floor below and walk north to a skull switch that will activate a lift leading up to this ledge. Enter the teleporter on your right to reach a distant platform with two to four mancubi, then enter the next teleporter in front of you to reach a metal platform with imps guarding a switch. Flip the switch then enter the teleporter again to return to the arachnotron's ledge, then follow the path east and south past a few mancubi and imps until you confront some revenants who are guarding a supercharge and the blue skull key. After taking the key head back to the starting point, watching out for demons and pyro knights (plus an arch-vile on Ultra-Violence and Nightmare skill levels) that have teleported in.

Go through the south archway and follow the path until you drop to the floor below. Follow the path south and west, watching out for more arachnorbs that teleport in, until you go up some steps leading to another supercharge and the yellow skull key. After taking the key head back the way you came, killing some revenants and pyro knights that teleport in.

With all three keys, return to the starting point and open the three colored skull bars to reach the exit teleporter.

At the yellow key section, drop into the lava on the south side then head south to a large platform. You will find a megasphere on the top level, protected by imps and two arachnotrons.

* The vertex count without the effect of node building is 15119.