MAP22: Storm Approach - Dark City is the twenty-second map of 10 Sectors. It was designed by Robert Beladi and uses the music track " ". 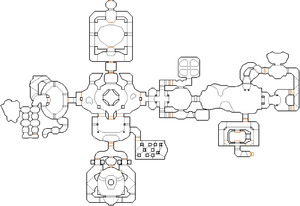 Map of Storm Approach - Dark City
Letters in italics refer to marked spots on the map. Sector, thing, and linedef numbers in boldface are secrets which count toward the end-of-level tally.

Get into the outdoor courtyard at the start and press the lion switch to open the doors to the north. Get back on the walkway and go through either door, being sure to pick up a super shotgun before stepping outside again. In this central area, take the lift up first and grab the yellow key. Go back down to ground floor and head west this time. A lift lowers as you approach, ride it up and turn right, following the walkway to a yellow switch. This switch opens the door you can see to the south. Run there and around to get the red key.

Backtrack to the center and go east, across the pool of mud. You will see a BFG9000 as you head across. Head behind it, ride either lift up, and follow the path to the blue skull key. Now go back to the center and take the central lift up. Take the blue door to the north for the final area. You will have to fight several enemies depending on your skill level, which can range from mancubi to a cyberdemon. The switch in the middle of the yard will open the door leading to the exit switch.

There are a number of optional pickups if you need them: