MAP22: The Deepest Reaches is the twenty second map of Perdition's Gate. It was designed by Mackey McCandlish (Avatar).

Plot: This area of Hell has been devoted to the integration of technology from conquered worlds. Avenge the races that the hellspawn destroyed. 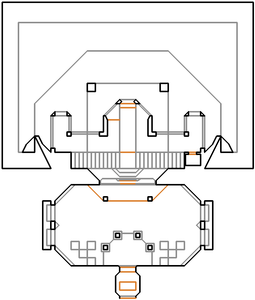 Map of The Deepest Reaches
Letters in italics refer to marked spots on the map. Sector, thing, and linedef numbers in boldface are secrets which count toward the end-of-level tally.

Pick up the yellow key from the left side of the building you begin in front of. As you approach the red door at the end of the corridor stairs will raise to the left and right up you, leading up to the ledges and windows you could see from the outside of the building. Up here you can find both the red and blue keys.

As you pick up the red several monsters will teleport into the corridor below you after a short delay.

Behind the red door are several monsters facing away from you, many on pillars. Entering the room will cause the pillars to begin to raise and lower. Get on one to be taken up to the raised platform in the back middle of the room. Head through the blue door on said platform to find the exit.

The enemies in the room behind the red door will not activate if you attack them from the stairs or further back on account of block sound linedefs. This allows you to pick them off one at a time without alerting the rest.

* The vertex count without the effect of node building is 348.