MAP22: The Escape is the twenty-second level of Memento Mori. It was designed by Denis Möller and uses the music track "Triangle of Fear" by Mark Klem. It features a similar situation to the spider mastermind / cyberdemon duel from Doom II's MAP20: Gotcha!, where the player must trick two spider masterminds into fighting each other. 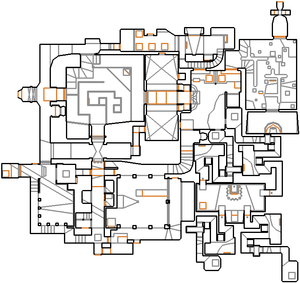 Map of The Escape
Letters in italics refer to marked spots on the map. Sector, thing, and linedef numbers in boldface are secrets which count toward the end-of-level tally.

You begin in a hallway. Go up the staircase immediately to your left, killing the former humans. Flip the switch at the end, then return to the hallway. This switch has raised the bars at the other end of the hallway, so continue across the bridge into a maze-like area. Follow the maze around clockwise, being wary of a spectre ambush from behind about one third of the way in. At the end of the maze is an alcove with a Hell knight and a switch. Dispatch the Hell knight, prepare your preferred weapon against demon hordes and press the switch.

The walls of the maze will lower, revealing up to ten demons coming at you from all directions. Take them all out, heal up and flip the switch in the northeast corner. This reveals a large cage full of imps in the eastern wall of the room, as well as a door in the west wall. A few well-placed rocket launcher shots will solve the problem. Head through the western door, equip your chaingun or plasma gun and ride the platform down to a nukage-filled area. You will immediately be set upon by a pack of imps. Kill them, run forward and activate the switch in front of you.

Ride the platform back up. A trap has opened in the southwest corner, with up to two cacodemons. Once they are done for, go up the staircase and open the metal panel ahead to gain access to the imp cage. Open the door in the east wall and prepare for the level's set-piece battle.

The room is at first empty but for a soulsphere (Hey, not too rough and below), two medikits (Hurt me plenty) or one medikit (Ultra-Violence and above). Approach closer and the door behind you will shut while the walls on either side open, revealing a spiderdemon on either side. To survive this encounter, you have to first put yourself in the line of fire. The two spiderdemons will hit each other and infight, blowing each other up. Finish off the surviving spiderdemon if needed. Once both of them are dead, run over to the northern platform and flip the switch, then run over to the southern platform to grab the red key.

Drop into either slime channel in the spiderdemon room and open the door at its eastern end and ride the lift up. Open the door with the silver markings to enter a large empty room. The yellow and blue doors are on a ledge that you cannot reach, so head for the switch in the southwest corner. Kill the Hell knight (Hey, not too rough and below) or baron of Hell (Hurt me plenty and above) in the corner and flip it.

This lowers you into a tunnel. Notice a bright rock alcove to your left. An imp will approach you - when you shoot it, a teleport trap activates, teleporting up to ten imps and five chaingunners into the alcove, one at a time. Simply pull out your chaingun or plasma gun and "camp" the alcove until they're all dead.

Continue down the corridor to a door and a switch. Flip the switch to raise a bridge across the starting hallway, then go through the door to a red door. Open the red door, kill the shotgun guys waiting in ambush, then flip the switch on the east wall to ride the lift down. Run across the nukage to the platform with the yellow door (be careful of the many imps in the main pool), turn left and follow the corridor all the way around to a door.

Go through the door to a walkway overlooking the yellow key. Flip the switch at the end of the walkway to raise an invisible barrier, then drop down to the floor ahead. Go to the southwest corner, where there are two switches. Flip the blue (south) one first to raise the bridge to full height, then the red (west) one to lower the bridge like a lift. Run onto the bridge before it rises.

When you are about to collect the yellow key, equip the rocket launcher and face backwards (east) before stepping onto its pedestal. A trap will open with up to five chaingunners and four shotgun guys, who you can get the jump on instead of vice versa.

Backtrack all the way to the yellow door. As you leave the yellow key walkway, stay close to the side of the corridor with the brown windows. This allows you to avoid a drop trap near the door.

As you open the yellow door, you will be set upon by up to two revenants, which should not be too much of a problem. Step through the silver teleporter.

You are now on the ledge in the room after the spiderdemon room, next to a yellow door. A small platform has also risen up to allow access to this part of the ledge from the ground floor. Go through this yellow door and go down the stairs to a grey room. This next room is filled with traps:

Go back up to the staircase. This time, climb it all the way to the top. You are now in the cage-like area where the shotgun guys and chaingunners were earlier, and a new room with four teleporter pads has opened- three in a line and one partially hidden in a far corner. Each of them will take you to a similar sewer-like area, where you clear out enemies, flip a switch and ride an elevator to the outdoor area with the blue key. After use, each teleporter rises up, preventing anyone else from using it. However, out of the four areas, two lower one of the two sets of bars protecting the blue key and two lower the other sets of bars. The closest teleporter to the entrance and the one in the far corner belong to one set, and the other two teleporters to the other. On single player, there is an extra teleporter in the blue key area for you to go back and use another teleporter of the four. This teleporter is closed in co-op mode. While 3 and 4 player co-op guarantees that at least one pair of players will use one of either set of teleports, On two player co-op, make sure that each player uses one of each set of teleporters - if both of you use two in the same set, you will be stuck.

Once the bars are lowered, flip the switch in front of the blue key three times. This lowers the blue key, removes an invisible barrier and lowers a nearby teleporter so that you can exit. Unfortunately, this also triggers a dangerous teleport trap, With up to eight shotgun guys and six chaingunners teleporting into three different locations in this tight space, cover is at a premium. Using the switch pedestal as cover is strongly recommended.

Step into the white teleporter. You are now on the other half of the ledge with the blue door. As you approach the blue door, immediately turn around for a chaingunner trap behind you. Go through the door, kill the Hell knight ahead and follow the platform to a wooden door in the north. Destroy the barrel ahead and flip the switch behind it.

With that done, drop down into the lower part of this room. Head for the southwest part of the room. As you walk past a pillar with skulls on it, a door in the south will open. Step into the pool of water beyond the doorway to end the level.

If you edge very slowly toward it, you can grab the yellow skull key without triggering the chaingunner trap behind you.