MAP22: The Tower is the twenty-second map of 32 in 24, a deathmatch megawad. It was designed by Infurnus and uses the music track "".

It was the author's second map for the project, following Sledgehammer. Overall it was the twenty-fifth submitted map, arriving at almost exactly twenty hours into the session. According to the author, it took 1-2 hours to build, plus another 15-30 minutes for balancing and testing. 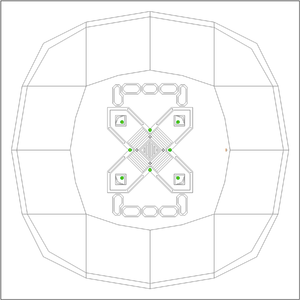 Map of The Tower 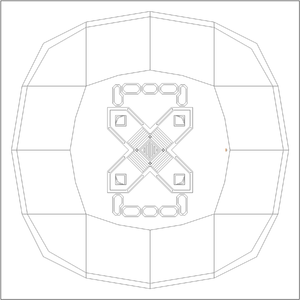 Map of The Tower

The Tower is a small level, with the main play area taking the form of an X-shape that fits within a 2048x2048 unit square. A canopy is located at the centre of the cross, and houses a berserk pack. At the end of each arm of the X is a small, shallow pit, each containing a different weapon and a spawn point (see player spawns).

To the north and south of the cross, there are a groups of platforms that players can jump to. The platforms in the north mainly contain health bonuses, with a medikit at the middle of the group. The platforms in the south instead have armor bonuses, with a megaarmor in the middle. If the player falls off a platform, the lava far below deals 20 damage before armor, and there is no way to escape.

* The vertex count without the effect of node building is 452.