For the standalone version of this level, see Thematic Elements.

MAP22: Thematic Elements is the twenty-second map of Community Chest 2. It was designed by Thomas Lutrov (Lutrov71) and Kimmo Kumpulainen (Jimi), with Lutrov building the architecture and Kumpulainen implementing the gameplay. It uses the music track "Nobody Told Me About id" from Doom, and was originally released standalone. 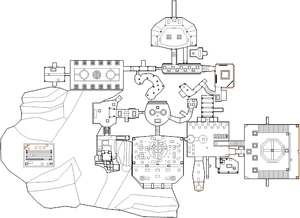 Map of Thematic Elements
Letters in italics refer to marked spots on the map. Sector, thing, and linedef numbers in boldface are secrets which count toward the end-of-level tally.

Your starting point also contains the exit, but you need the keys to open it. Three Hell knights guard three teleporters. To proceed, take the leftmost teleporter with the rocket launcher in front of it. You will appear in a terminal. When you go forward, a closet opens behind you with four sergeants in it. Moving forward more triggers nine chaingunners and an arch-vile. The switch nearby removes the bars blocking the lift. Flip it and go up. The next switch opens a congested chamber of chaingunners, with the switch inside triggering a number of doors, some are monster closets. When done with this area, go north. In this big area with the blue hallway to the right, entering the blue-tiled hallway triggers a large teleport ambush, so be prepared for that. Continue going eastward, past the blue key, until you find a switch past the water which lowers the keycard. Grab it and head south into a large cargo room. There are a few enemies in here, but when you press the switch on the opposite end, you will reveal a ton of monsters. The next switch here releases two arch-viles, as well as open the way you came so you can return. Go back to the room with the blue-tiled hallway and there should be a teleport on the northeastern side.

You will appear back at your starting point. Go through the middle teleporter, and you should be able to use the blue key on the door to the room with the water fountain. Here there are spectres and cacodemons. Keep going east, all the way following the path and fighting opposition as you go until you take the lift down to the red skull key. Go back up, watching out for reinforcements. Head back to the hallway that had lots of zombies and an arch-vile, then go north to the red door into a Plutonia-like area. Take either lift up and take the next lift up to a switch. This lowers one of the barricaded pedestals on the ground floor. Stepping on it teleports you to a very confined area with three mancubi in front of you and three demons behind you, so be prepared for them. Hit the switch here and the other pedestal will be available. Stepping on it opens a passage containing an arch-vile and some cacodemons. The teleporter at the end here takes you back to the starting point.

Take the rightmost teleporter and open the red door for the final few areas. Go east into the metal hall. This area can be really tough, but when you manage it, climb the stairs and hit this next switch to open the passageway to the next teleporter. When you use it, turn around and go through the next door to the next switch here. This opens a passage in the big yard a slight distance from the entrance to the metal hall. Here are some shotgun guys, chaingunners, and imps, as well as a teleporter to the yellow key. Take it, and in order to leave, press the yellow switch on the stairs in front of you to open a room to the south. Take the teleporter back to the start and open the bars to exit.

It is possible for the player to lock himself in the room south of the room where the blue key is found. The door leading to this room (sector 150) cannot be opened from inside by pressing on it, and the player can only get out by pressing the switch (linedef 3539) which is assigned a single-use action 133 (S1 Door (Blue) Open Stay fast). This switch becomes accessible after pressing another switch in the aforementioned room which also releases monsters guarding it. Normally, the player would become trapped in the room after he enters, but if he is fast enough, he can avoid this by running in and out of the room and luring monsters out. It then becomes possible to run inside and press the switch before the door closes again, and the player will become trapped completely within the room, having no means to leave it without cheating.