MAP22: Triad of the Minds is the twenty-second map of 1 Monster. It was designed by scwiba and uses the track "Shawn's got the Shotgun" from Doom II.

Like all maps in the megawad, the map features only one type of monster, in this case the spiderdemon. There are only three of them in the map, but the player is expected to defeat them by trickery, navigating trap-filled chambers so that he can kill the monsters via crushers and telefragging. 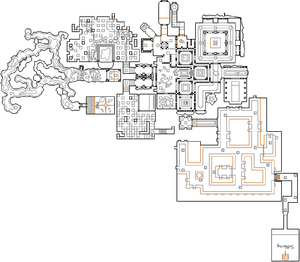 Map of Triad of the Minds
Letters in italics refer to marked spots on the map. Sector, thing, and linedef numbers in boldface are secrets which count toward the end-of-level tally.

Press the switch to lower the lift and quickly take cover before getting killed by the spiderdemon. Head east, press the switch in the room to the south-east in order to lower the obstacle, and proceed forward. Go east to press another switch that will clear the way. Head through, press the switch to the north-west, which will open bars to the east of the room and allow you to press another switch. Now you can leave this room by going west. Head forward and open the door. Rush forward toward the health bonuses to avoid a crusher. Carefully head through the crushers. Grab the yellow key and stay close to the wall, as another crusher will be activated above you. Head back, through the door, and open the yellow key door.

Grab the chaingun to the north and several passages will open. Head south until you come to a large room with a hanging body. There is a switch to the east, so press it to open the two passages to the west. You can tackle these passages in any order.

Upstairs, you will find a room full of pillars, with a spiderdemon in a cage. You have to find and press three switches, but beware: each switch you press will remove some of the pillars and deprive you of some of the cover from the monster's gunfire. The switches are located:

Once all the switches are pressed, a teleporter will be revealed to the east of the room (near the first switch.) It will take you to a mazelike cavern filled with lava. A single radiation shielding suit is provided at the entrance, and you need to find the exit before it runs out, or you will take heavy damage. From the entrance, take a left and go west as far as you can, then take a left at the end of the passage. You will come to a lion switch which opens the bars to the exit. Press it, then head back east and, when near the entrance, turn south and keep going. Head through the door, into the pit and into the teleporter. You will telefrag one of the spiderdemons. Press the skull switch.

Upstairs is a room full of crushers. By consulting the automap you can see where the safe spaces to stand are. Make it to the south-east of the room. You will then need to make it past a bunch of smaller crushers; as soon as all of them are rising, run underneath. Enter the teleporter. In the blood-filled maze, you will have to find and press four switches, all while avoiding the roaming spiderdemon.

Pressing the third and fourth switches opens the passage to the south-east of the maze. Enter it and head forward through the darkness until you come to a teleporter. Entering it will bring you back to the level's main area and will activate crushers that will kill another spiderdemon. Once it is dead, drop down to its platform and press the skull switch.

Once both of the skull switches are pressed, a secret door opens between two green torches in the large room with the two passages. There is a plasma gun inside and some energy cell packs. When you pass through this door, stairs will appear to the east of the large room. Head up the stairs and enter the teleporter to telefrag the final spiderdemon. Press the satyr switch, drop down and get the red key. Use it to open the nearby door and enter the exit.

Completing either of the side areas (the lava maze, or the blood-filled area) reveals a teleporter in the large room which can be used to go back to the side area's final teleporter, and subsequently, to one of the spiderdemons' platforms.

* The vertex count without the effect of node building is 6027.