MAP22: Tunnels is the twenty-second map of Daedalus: Alien Defense. It was designed by Gary Gosson and uses the music track " ". 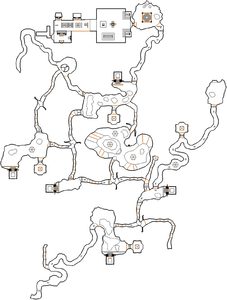 Map of Tunnels
Letters in italics refer to marked spots on the map. Sector numbers in boldface are secrets which count toward the end-of-level tally.

* The vertex count without the effect of node building is 5453.

The coloured arrows on the ground are essential for navigating this map. Each elevator is colour-coded, and the arrows at a given point indicate the approximate direction in which each elevator lies from that point. This was introduced at the beta stage due to feedback from the testers - the earliest versions of this map had no navigational aids whatsoever.