MAP22: Twilight of Neo Shotkon City (named "End Credits" on the automap) is the twenty-second and final map of DBP37: AUGER;ZENITH. It was designed by SuperCupcakeTactics and JadingTsunami, and uses the music track "Twilight of Neo Kobe City" from Snatcher. This map is designed as an epilogue, and contains little to no gameplay. The par time defined in MAPINFO is 1:40. 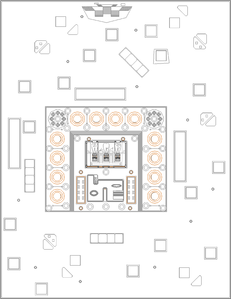 Map of Twilight of Neo Shotkon City
Letters in italics refer to marked spots on the map. Sector, thing, and linedef numbers in boldface are secrets which count toward the end-of-level tally.

* The vertex count without the effect of node building is 7387.