MAP23: A Little Big Massacre is the twenty-third map of Kama Sutra. It was designed by Adolf Vojta and uses the music track from Heretic's E1M2: The Dungeons, which plays at a slower tempo than normal for unknown reasons. It is a remake of E1M4: The Guard Tower from Heretic, made using Doom textures and inhabited with several hundreds of strong monsters. In addition, this time the map's namesake (the tower) is nowhere to be found.

Everytime I played the first part of Heretic E1M4 I thought it could be a good typical monsters crowded map for doom. So this map is a remake. The gameplay I focused on many monsters they could randomly roaming through the buildings so it could be hard to catch all monsters without sound. That means this map could be played in many ways.

I remember when I completed it and let Method to play it I surely expected he will quickly die at the yellow key, there are 5 cybies followed by 80 revenants. He killed them all on the first try and said "..average fight". OMG what more do I have to add to kill him finally? :) 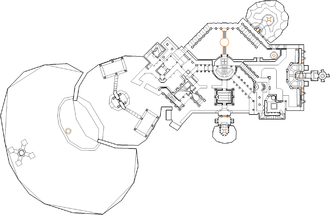 Map of A Little Big Massacre
Letters in italics refer to marked spots on the map. Sector numbers in boldface are secrets which count toward the end-of-level tally.

* The vertex count without the effect of node building is 2676.