MAP23: Anger is the twenty-third map of Scythe. It was designed by Erik Alm, and uses the MIDI rendition of "Absence of Light" by Symphony X. 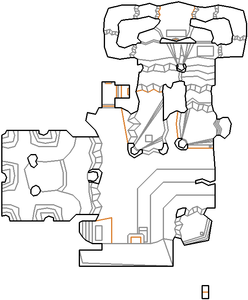 Map of Anger
Letters in italics refer to marked spots on the map. Sector numbers in boldface are secrets which count toward the end-of-level tally.

Grab the berserk pack as you enter the teleporter. You will end up in a large open area with a number of places to go. A super shotgun is directly behind the pillar where you teleport. A rocket launcher is in a cove to the north (guarded by barons of Hell). You can get a soul sphere to the southwest (look out for revenants). The platform with the arch-vile (or revenant if you are playing on Hey, Not Too Rough or lower) lowers when you approach it so you can grab a chaingun. If you go to the large cavern west, there are imps, cacodemons, and a BFG9000 in the middle. To proceed with the map, go through the cavern where you can get the chaingun. Head through the bloody river in the north all the way around to find a switch. Press it and head back and southward towards the blue skull key which is now available. Now open the blue door to find two cyberdemons and a switch. Press this switch, and the pillar with the red skull key will lower, but also several monsters will teleport in the field. Grab the key and return behind the blue door to open the red door to find an arch-vile and a switch, which allows you to access the exit in the south (guarded by another arch-vile).

It is possible to get an early exit by having an arch-vile blast you up onto the exit platform, before the stairs are raised. Potentially this can skip most of the level, if you get lucky.

* The vertex count without the effect of node building is 780.