MAP23: Aztecorum is the twenty-third map of Plutonia 2. It was designed by Joe Pallai, and uses the music track "I Sawed the Demons" by Robert Prince. The par time defined in MAPINFO is 3:00. 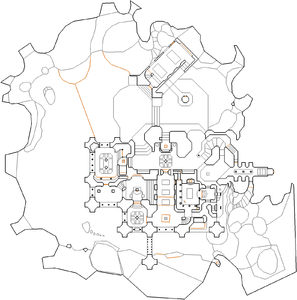 Map of Aztecorum
Letters in italics refer to marked spots on the map. Sector, thing, and linedef numbers in boldface are secrets which count toward the end-of-level tally.

There are three choices at the start. Start with the right path, but not before gathering a few weapons nearby to fend off offending monsters. On the right path, head all the way to a skull switch, and then return to the start and go north. The door will close and an area to the left will be revealed. Kill any enemies there, and if you pressed the skull switch from before, there should be a switch on the right wall of the hall. This will open the front door, so head through it, killing any enemies, especially the caged chaingunners. You will want to head down the staircase to the east first. At the bottom are a few more monsters, with a mancubus guarding a switch to the east. A pathway to the south is revealed upon pressing the switch. Climb the rocks, and enter the hall where the chaingunners are coming from. Here you should navigate your way until you reach the blue skull key, but look out for a trap with a chaingunner and two revenants upon picking up.

You will then have to go to the blue door in the northern part of the map. You can take a shortcut by jumping into the blood moat with the soul sphere and arachnotrons, then using the teleporter to the right. Once there, you can either open the blue door directly, or use the switch on the column to the right of the blue door building. Either one opens the blue door, so head through the building and through the north door. Heading down the rocks, you will reach a large blood moat, that you must cross. It eventually becomes damaging, and just as it does, you are going to contend with a very large number of monsters. What you should do is head for the northwest rock in this large moat for some radiation suits. You should then head for the southern part of the large blood moat, where you find the yellow skull key next to Secret #5, which has a BFG9000 that will be handy for fighting the monsters. After getting the yellow key and satisfied with the carnage, return to the starting point and head west for the yellow door. There is a switch behind some supplies, which opens some bars to the west, in an area that was opened before. After pressing the switch, a cyberdemon shows up in the main hall, so kill him and then pass the stairs the bars blocked before. Upon stepping through the door in the next room, a few walls open up revealing spectres and pain elementals. From where the spectres are is a switch, which opens up the exit. Look out for the chaingunner and arachnotron upon exiting.

Get back outside and follow the blood river to the south. On the southern end of the blood fall leading down into the pool is a dead tree. From the northern shore you have to straferun over the blood river and the corner west of the dead tree to jump over the blood pool.
On this plateau you can walk westwards around the wall, make some attack noise to attract the monsters down in the blood lake and enjoy watching them infighting. Even better, you can drop down to the aforementioned walkway (and pick up the invulnerability sphere).
From here (or on easy skills: from the plateau) drop either down to the safe eastern blood pool or dare jumping into the western bloody lake to pick up the yellow skull key, register secret #5 and run for your life to the north to take a big shortcut through the map.

Pushing the switch (linedef 423) in the southwestern corner of the patio (see secret #2) before killing the two revenants (things 63 and 64) next to the teleporter (sector 37) will probably prevent the arch-vile (thing 88) from teleporting in since its teleporting linedef (756) is a type 39 -W1 Teleport.
Or, less techie talk:
This means that once the switch is pushed, the arch-vile can cross the triggerline to teleport in but the teleport trigger only works when crossing it for the very first time. As the revenants still are alive, they keep dithering around and occupy the arch-vile's teleport destination at the only moment he is able to teleport, thus keeping him trapped (and alive) forever (unless cheats are used).