MAP23: Ballistyx is the twenty-third map of PlayStation Final Doom, and the tenth map of the TNT episode. The map is based on the PC version of MAP26: Ballistyx from TNT: Evilution originally designed by Mark Snell and Jim Lowell, with changes to accommodate the PlayStation's memory limitations and add enhancements such as colored lighting. Changes for the PlayStation port were authored by Tim Heydelaar.[1]. It uses the music track "Lamentation" by Aubrey Hodges. 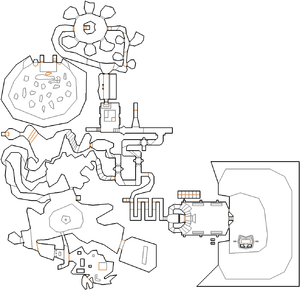 Map of Ballistyx
Letters in italics refer to marked spots on the map. Sector numbers in boldface are secrets which count toward the end-of-level tally.

You start the level facing an altar. Go through the door on your right to enter the chapel. Inside, take the super shotgun and climb up the staircase. Slay the spectres and take the berserk (you can return to kill the alerted imps). Enter the brick passageway and kill a spectre. There will be a lift here going down.

Continue going down and killing any spectres you encounter until you come to a grey corridor with a fork that lets you go either left or right. Go left and open the door on the west wall, behind which is a staircase leading to a cave with a yellow floor. Be cautious here, as there are several shotgun guys lying in ambush. Follow the path until you come to a large cavern with a blood pool; the blue skull key is in the middle of this pool. Eliminate all the enemies in this area, then go to the key and take it. Do not blow up the barrels, as they will be useful later.

Return to the fork corridor mentioned in the previous paragraph. This time, take the path going north. Follow the path and eliminate all enemies you encounter until you come to a rectangular room. You can climb to the ledge via the lift to take a medikit and a box of ammo. Climb the north staircase and go through the door at the top. In the next room there will be two cages; the cage on the left is open and contains imps. When you try to open the door leading inside this cage, the cage on the right will open behind you to reveal imps (plus a Hell knight on Ultra Violence skill level), so be cautious. If you do go inside the left cage, you can find armor and a box of shells within. When you are ready, go through the blue door.

Here, you can go either left or right, but it is advisable to take the path to the left now. Follow the path to a low-ceilinged room with a slime floor. Walk around the stone wall in front of you and press the switch on the east wall between two tall red torches. Return to the room entrance, look at the aforementioned stone wall again and you will see that it has opened to reveal a teleporter. Go in and you will find yourself in a cage, with many enemies outside on red rock columns. You can stay and fight if you wish, but you only need to take the yellow skull key (plus an optional rocket launcher) before opening the door in the north-east corner of the cage and using the teleporter behind it to go back to the previous area.

Back in the low-ceilinged room, you can eliminate enemies that come from the newly opened alcoves and collect some optional items before moving on.

Return to the cavern with the blood pool where you found the blue key. Go to the south-west corner of this cavern and here you will find some enemies guarding yellow skull bars. Open the bars, take the berserk pack behind them and cross the blood river to enter a brick room. Go forward a bit until you can see a short red torch on the right (all other torches in this room are green). Behind this torch is a narrow passage containing shotgun guys and a box of shells, as well as chaingunners on Hurt Me Plenty or Ultra Violence (HMP/UV). When you go into the passage, a square metal column will lower behind you revealing a Hell knight on I am a Wimp/Not Too Rough (IAAW/NTR), or a chaingunner on HMP/UV - kill this enemy and take the red skull key they were guarding.

Watch out for a chaingunner ambush as you backtrack to the blood pool cavern. When you get back to the cavern, you will see that a room has opened to the east containing a large number of enemies; if any barrels are intact you can lure the enemies into these to destroy them quickly. Follow the path back through the caves, this time using the shortcut in the north wall which was recently opened. Go to the right and climb the stairs to the door leading back to the grey corridor.

This time, head left. You should come to a small room with the red door, candles and spectres. Enter the red door. In the white cave, go down and follow the tunnel, killing any enemies in your path. At the end you will see a small marble room with a teleport pad and a Hell knight. Enter the room to alert the knight and cause it to teleport away, then step on the white pad to be teleported back to the starting area. Kill the Hell knight, and you will see that the altar is now marked with exit signs. Step onto the altar to end the level.