MAP23: Barrels o' Fun is the twenty-third map of Doom II. It was designed by Sandy Petersen and uses the music track "Bye Bye American Pie". The par time is 3:00. It is notable for containing large amounts of barrels, as the name suggests. 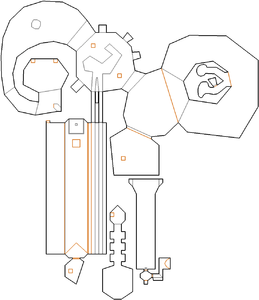 Map of Barrels o' Fun
Letters in italics refer to marked spots on the map. Sector, thing, and linedef numbers in boldface are secrets which count toward the end-of-level tally.

From the start, turn around and run as fast as you can to the door at the opposite end of the hallway before the mancubus causes a chain reaction of explosions. Go through the teleporter behind the door to be taken to another area. Again, run to the end of the hall before the chaingunners cause all the barrels to explode. Once all the barrels have been detonated, you can go back and pick up all the goodies you left behind. When ready, go through the second teleporter. In the next area, quickly kill the pain elementals before you become swamped with lost souls, and flip the switch at the end of the room. It will raise a platform across the starting hall. If, for some reason, the wall in the room will not rise when the switch is pressed, strike it with a hitscan weapon and it will open. Run across the platform to the other newly revealed room across the way and follow it to the opposite end, where you will find two passages.

After dropping from either passageway, you will find yourself on a platform floating in a pool of blood. First, kill the enemies overlooking the platform to make things easier. Once they have been disposed of, drop into the blood and go through the teleporter in the southeast corner of the blood pool. It takes you to an area with two wide tunnels. Go through either (they lead into each other) and into the smaller rocky tunnels at the far end. There, you will find two caches with boxes of rockets. However, entering the tunnels will release several arachnotrons back outside. On Hurt me plenty or higher, there is a spider mastermind as well so make sure you are prepared for a big fight. Once the monsters have been dealt with, pick up the yellow skull key in the newly opened room outside and go through the nearby teleporter.

Once on the other side, turn around and follow the cavernous tunnel to its end, where you will find a BFG9000 and an army of demons. Take the teleporter on the left and immediately start running again before the chaingunners cause the barrels around you to explode. Head through the exit door at the end of the hall and open the yellow door to the left. Shoot the barrels you can see to clear the way to the exit teleport.

* The vertex count without the effect of node building is 331.