MAP23: Blood Runners is the twenty-third map of Community Chest. In this level, you are tasked with exterminating a tribe known as the "Blood Runners" in a mountaintop base. It was designed by Sphagne, and was originally released standalone. It is the author's eighth level, and features new-age-demo-1.mid, also known as "kabbalah.mid," as music. 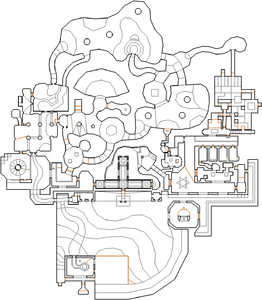 Map of Blood Runners
Letters in italics refer to marked spots on the map. Sector numbers in boldface are secrets which count toward the end-of-level tally.

* The vertex count without the effect of node building is 2020.