MAP23: Blood Sacrifice is the twenty-third map of Alien Vendetta. It was designed by Kim André Malde and uses the music track "Demons on the Prey" from Doom. 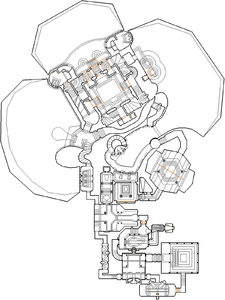 Map of Blood Sacrifice
Letters in italics refer to marked spots on the map. Sector numbers in boldface are secrets which count toward the end-of-level tally.

From your start head across the bridge but do not head through the path directly in front. Just pick up the nearby shotgun and head up the stairs here. The super shotgun is in the next room, and the big hall next to it has several chaingunners on walls as well as an arch-vile. Head north here into the next hall, then east. You might catch a good glimpse of the fortress as you go. Press the switch in the room with the pool, looking out for the arch-vile in the water, then continue eastward. There is a cyberdemon in the next big room, and when you go halfway across it, two monster closets will open. If you want, use the other monsters to infight with the cyberdemon. From there, just follow the path until you hit ground floor. Grab the rocket launcher on the wall, and continue northward and westward along the path to the next open area.

Here you will have a dock with some ammo on it, and a choice of two castles. Go to the northern one as the southern one is locked. In the northern castle, you can explore if you want, finding among other things a cyberdemon in the middle of it. You ultimately need to reach the eastern side of the castle though. When you make it outside on the eastern side, there should be a switch and some cacodemons. Hit this switch, and then go back into the castle. Head up the curvy staircase you should see on your left. Then climb up the next set of stairs to the next level of the castle. Cross the bridges all the way to the southwestern part of the castle which should have a mancubus in it. Before, this area was barred up, but it should now be open. Climb down the stairs here and hit the switch here to reveal a revenant. Hit the next switch to open the nearby bars back into the middle of the castle. You should now be able to go to the northern end of the castle, where another cyberdemon will be walking around. Here is another fork, go right first to find some pain elementals and the yellow skull key. Then go left, and when you reach the bars, press on the yellow skull on the wall to open them. Look out for the revenants, then make sure to press the switch in this room.

You will be able to exit this castle to the south, so do so, and head back to the docks to go to the southern castle. This should now be open, so climb up the curvy staircase and kill the imps. Just follow the path, you will see a familiar hallway that you have already been in soon, but you will not need to come back here. At the end of the path is a soul sphere and a switch. Press it to lower the floor to four mancubi, then head eastward and northward to find a spider mastermind. Now backtrack all the way back to the bridge you started on, going the other way, and you should find the exit open for you to go through. 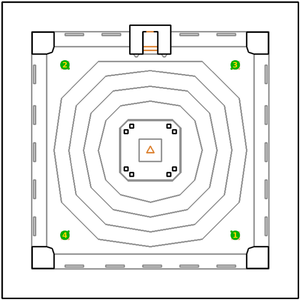 * The vertex count without the effect of node building is 4124.