MAP23: Bloodpit is the twnety-third map of 32 in 24, a deathmatch megawad. It was designed by Ronald Lubbelinkhof (Dutch Devil) and uses the music track "Suspense," originally composed by Robert Prince for Doom.

It was Lubbelinkhof's second map for the project, following Warpath. Overall it was the twenty-sixth map to be submitted, arriving about twenty and a half hours into the session. According to Lubbelinkhof, it took about half an hour to build. 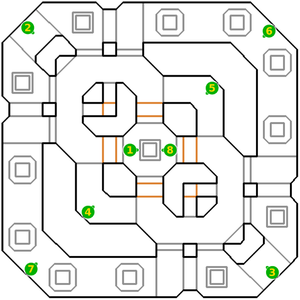 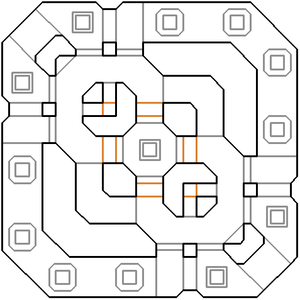 Bloodpit is a very small map, with the entire map area fitting inside a 1408x1408 unit square. The map consists of hallways with red brick walls running around the outskirts of the map, with a central area featuring a structure that holds the eponymous blood pit, a small octagon with a soulsphere at the bottom, and fast, 1-second lifts to get back out again.

Two octagonal structures attached to the north-west and south-east edges of the pit hold items at their centre which can be obtained by pressing the lion-head switches inside. Players can get a berserk from the north-west, and a megaarmor from the south-east.

In the outermost hallway, a plasma gun can be found near the south-east corner of the map, and a rocket launcher near the north-west corner. In the north-east corners and south-west corners, players can find a chaingun and shotgun respectively. Decent amounts of ammo of all types can be found near to their respective weapon pickups. The only health in the map is the soulsphere and four stimpacks in the bloodpit, plus some health bonuses towards the south-eastern parts.

This level contains eight spawn points, all of which are place on top of a super shotgun.