MAP23: Cliffside City is the twenty-third map of Project Einherjar. It was designed by Mike MacDee (Impie) and uses the music track "". 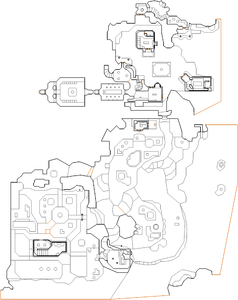 Map of Cliffside City
Letters in italics refer to marked spots on the map. Sector, thing, and linedef numbers in boldface are secrets which count toward the end-of-level tally.

The first city sector has three tiers, the first two which are immediately accessible and crawling with fratboys and valravens; the lift to the highest tier is inactive initially. Clear the area of enemies before entering the second sector, a maze of brick houses and nastier foes. The third sector is inaccessible, blocked by a gate marked with a green light.

After killing all enemies in the brick sector, use the blue skull switch to access the lift on the side of the central building, which takes you to the rooftops. Roof-jump through a large ambush to the cliff on the other side, which connects to the first sector's highest tier (and triggers another ambush). Run along the cliff to the metal building with the fenced-off switch, which opens the gate to the third sector.

There are three large buildings in the third sector, one of which contains a high-ceilinged church populated by praying cultists. There is a blue switch on the back of a pillar here, which opens the way to the exit. Another building can only be accessed through the chimney: here you find the red key in the upstairs bedroom. Take it back to the red tower of the first sector and go up the lift to a dog ambush and the blue key.