MAP23: Close Quarters is the twenty-third map of Congestion 1024. It was designed by Job and uses the music track " ". 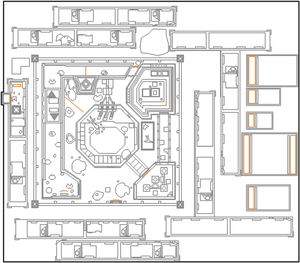 Map of Close Quarters
Letters in italics refer to marked spots on the map. Sector numbers in boldface are secrets which count toward the end-of-level tally.

At the start, collect the backpack to be teleported to another room. Climb up the stairs and flip the switch to lower the bars to your right. Go through the bars, open the door and press the switch in front to lower the bars to the left. Continue around the perimeter, past some small barred openings until you find a switch. Use the switch, return to the small barred openings and take the one on the right to end up in a grassy outside area. Follow the small pools of nukage to find the exit switch.

Due to two of the secret sectors being inaccessible, 0% secrets is the maximum score for secrets on this map. Also only 50% items is possible (0% on Ultra-Violence or higher) due to one of the secrets having an item that counts towards the items tally.

The trap line in the south-east room can't be crossed, the level can't be completed as is.

An imp (Thing 100) is located inside a wall at the southwest end of the map and is not accessible by any means aside from the no-clipping cheat.

The player 2 start (Thing 167) has no flags set for any of the three difficulty classes and is marked as multiplayer only, but because of special handling in the engine, it functions normally in the level.

* The vertex count without the effect of node building is 3010.