MAP23: Dark Arena is the twenty-third map of The Rebirth. It was designed by Björn Ostmann (Vader). 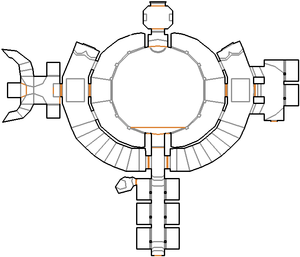 Map of Dark Arena
Letters in italics refer to marked spots on the map. Sector, thing, and linedef numbers in boldface are secrets which count toward the end-of-level tally.

The red door is only opened from its respective side once. When you enter the arena, the red door shuts behind you. There are two linedefs that trigger the door closing, and it is possible to actually render the level unbeatable by triggering one of the linedefs and then running through the door as it is closing, leaving you trapped on the other side of the door, unable to return to the arena.

* The vertex count without the effect of node building is 663.