MAP23: Death Mountain is the twenty-third map of Community Chest 2. It was designed by Cyber-Menace, and uses a MIDI rendition by Teck of the theme of Toxic Seahorse's stage from Mega Man X3.

It is loosely based on the location of the same name from the Legend of Zelda series, specifically as it appeared in the Dark World from The Legend of Zelda: A Link to the Past. Silent teleporters are used to simulate the effect of entering rooms separate from the main map, as in the game. 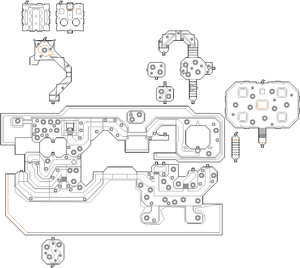 Map of Death Mountain
Letters in italics refer to marked spots on the map. Sector, thing, and linedef numbers in boldface are secrets which count toward the end-of-level tally.

The majority of the map is high on monster density, so make sure you find pickups in every corner as you kill any monster you come across. From the start, you need to climb up the nearby steps, one of which gets you on a ledge with a cave which you should enter. Follow the passage to the dead end, and an area will open up to the southwest revealing a switch which shows the exit to this cave. You will be in another monster-filled cave before you can actually head outside though. Once outside, you will likely be surrounded again, so try to break through and enter the red and beige tower (for those that have played The Legend of Zelda: A Link to the Past, this would be the location of the Mountain Tower). When you press the switch inside, be prepared for a timed battle in a confined space as you wait for the northwest passage to lower. To leave the tower, head through this passage and hit the next switch so you can exit. Back outside, head east until you reach a large turtle-like object (the location of Turtle Rock). Inside, there are lots of demons and Hell knights; grabbing the plasma gun here nets a cyberdemon as well. You need to press four switches in this cave to proceed further. Proceed through, blasting the baron of Hell as you go outside again, to the lower right reaches of the mountain. Head through either of the middle two doors and fight the monsters here. When you reach the octagonal portion of the hall, a switch on the western side allows you to exit.

When playing in Boom, Hall of Mirrors effects are visible when crossing the first bridge. However, these are mandatory, as fixing them would ruin special effects in other source ports.

The battle inside the red tower can be avoided simply by not firing a shot in this area and avoiding the imps, as the rest of the monsters then won't wake up.

* The vertex count without the effect of node building is 9071.