MAP23: Dis is the final level of Atari Jaguar, 3DO, Sega 32X and Game Boy Advance versions of Doom, based, as a renamed level, on E2M9: Fortress of Mystery with modifications made to accommodate consoles' limitations. The author of the conversion is American McGee and the original author of the map is Sandy Petersen. This level should not be confused with the original PC level, E3M8: Dis, which this level replaces as the end of Inferno.

The level was renamed back to MAP55: Fortress of Mystery in the Sony PlayStation and Sega Saturn versions, and, like the PC version, is now the second secret level in the game, though accessed from MAP15: Spawning Vats instead of E2M5: Command Center. The author of this conversion is unknown. Completing this level takes the player to MAP16: Hell Gate.

In the Sega 32X version of the game, this level can only be accessed if the player completed all the previous levels from the first level without cheating or use of the level selection feature. It is preceded by MAP15: Spawning Vats in this version of the game, as levels 16 through 22 (comprising the entirety of the Inferno episode) were cut due to ROM cartridge size restrictions for this version. 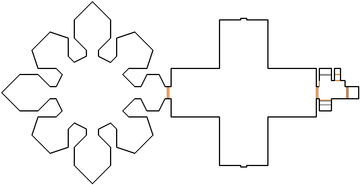 Map of Dis
Letters in italics refer to marked spots on the map. Sector, thing, and linedef numbers in boldface are secrets which count toward the end-of-level tally.

You start in a room surrounded by four barons of Hell. Head east through the door to a cross-shaped area containing ten cacodemons. At the east end of the room is a brick wall between two gray marble walls - open this brick wall to find a room with several doors. Press the switch on the west wall to open the north door concealing the blue skull key, then open the blue southern door concealing the red skull key, and finally open the red eastern door to get the yellow skull key. You can now open the yellow door in the north-east corner, and press the switch behind it to finish the level.

On Jaguar, 3DO, 32X and GBA, completing this level ends the game. On PlayStation and Saturn, the player will move on to MAP16: Hell Gate.

Each of the points in the starting room has a different item in it. Clockwise from north, they are a plasma gun, a rocket launcher, a computer area map, a shotgun, a chainsaw, another computer area map, a backpack and a chaingun. Megaarmor can also be found in the center of this room.

Although the original map was geometrically simple enough, this console conversion changes the following:

The PlayStation and Saturn ports feature some additional modifications: