MAP23: Elemental is the twenty-third map of the Newdoom Community Project. It was designed by Steven Melenchuk (Grunt). It uses the text screen music as its soundtrack. 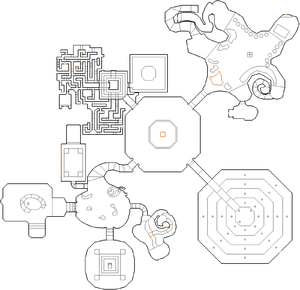 Map of Elemental
Letters in italics refer to marked spots on the map. Sector, thing, and linedef numbers in boldface are secrets which count toward the end-of-level tally.

From the start, only the northeast and southwest sections are open. Go to the southwest section. The only thing you can do here apart from getting Secret #1 is to press the switch on the wall. Doing so opens the southeast section, revealing a cacodemon and the first arena. The switch at the end here raises a bridge allowing access to the northwestern section. In this section's main room, you will notice a brown door with a bunch of gray doors. To open this door, press the switch on the northwestern wall. Now navigate the first tunnel until you find the switch here. Then go to the northeastern section. You can now use the large rock wall with cracks on it as a lift upwards. Ride it up and go southeast across the rocks to a cavern with a switch. After that, head to the southeast section to find the arena has expanded, and another switch is available. Hitting the gargoyle switch opens an area in the southwest section, go here and through the right path which is now open.

In this area with the basin full of blood, you may notice that some of the blood here is brighter than the others. What you need to do is approach the blood that is brighter and it will raise a bridge to the middle platform. Do this again to make it to the switch on the ledge. If you fall in the blood, use the ledge from where you came as a lift. Go back to the northeastern section and ride the lift up again. You can now head northwest thanks to another rock platform that formed when you pressed the switch in the blood basin. Follow the path to a switch and after pressing it head back to the northwestern section. A new door has opened here, go through here and find the next switch here, which further expands the southeastern arena. The next switch to press raises another rock in the northeastern section. Go up the lift again, going southeast and then northeast across the new rock, onto the spiralling passage to the next switch. Venture back to the southwest section after pressing it. You will find the southern passageway here is open. Here are a ton of monsters and a switch. Be wary of Hell knights and barons upon pressing it, then go back to the northwestern section. Find the new door open on the west wall and take this tunnel. You might find a door here, to open it, one of the dead-ends nearby has a switch to open it. In the next small room is the next big switch to press. This once again expands the arena in the southeast. The switch at the end opens up bars in the southwest section leading to the western area of that section. Go there, and climb the stairs to the next switch, returning to the northeast section once you press it. Take the lift up again, going northwest and then hopping across the newly-formed rocks. Follow the winding passage to a switch.

After this one, go back to the northwestern section for the next open passage through the sewers. This is the most vast of the sewer networks. Your goal here is to go through the doors near the far northwest. You need to press four switches around this network to do so. Once you find and press them all, go through these doors to an arachnotron and the next switch. Now go back to the southwestern section. The nearest door is open leading to a Dead Simple-type setup with mancubi. The switch in front lowers a wall of six arachnotrons, but also expands the arena in the southeast one final time (another note is that you are fully done with the southwestern section as well). Press the switch at the end of the large arena, and you should be done with the southeastern section for good unless you want to fight monsters in here. Head back to the northeastern section, going up the lift again. You have two choices of making it to the final switch in this area, but both involve the newly formed stepping stones you see. The switch opens up the final area in the northwestern section, go there, fighting the monsters and finding the switch on the pedestal here.

This opens up the exit in the center, and you should be finished with all the trials at this point. Go back to the exit to find a cyberdemon, a spider mastermind, and several pain elementals.

* The vertex count without the effect of node building is 1912.