MAP23: Get Out Of My Stations III is the twenty-third level of the first episode of Back to Saturn X. It was designed by Sarah Mancuso (esselfortium), who also composed the level's music track, "Waiting". It is the last hub level of the episode, and like the others, it contains no enemies or secrets, although some inaccessible pickups can be found at the end of the level. In the official add-on version, this level's name is Waiting III, taken from its track title. 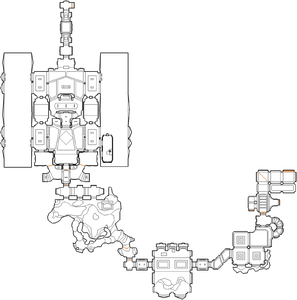 Map of Get Out Of My Stations III
Letters in italics refer to marked spots on the map. Sector, thing, and linedef numbers in boldface are secrets which count toward the end-of-level tally.

Unlike the other two hubs, this level is not a short walk to the other train. However, the path is very straightforward. Leave the train and turn left. Go through the door that opens for you, and make your way through the caverns. Follow the path as far as it take you. You will eventually come to a door. On the other side is a shotgun. As you move towards it, the level ends.

There are no secrets in this level.

* The vertex count without the effect of node building is 2955.