MAP23: Hatred is the twenty-third map of Requiem. It was designed by Dario Casali, and uses the music track "Dry Rot" by Mark Klem. It is one of a few Doom II levels which make intentional use of ghost monsters, created by having an arch-vile resurrect a monster who has been crushed. It also features a battle with the final boss.

This map is a taste of what Final Doom is all about - unleashing the potential of the DooM2 [sic] engine.
The level incorporates a unique use for the Archvile [sic] ghost making technique, where it can resurrect a demon giving him the ability to walk through walls and not be shot. The first known way to kill such an enemy is to hit him in a rocket explosion. Another way is to get the ghost to hit another enemy who has a close attack ability, who will then go and tear the ghost apart. 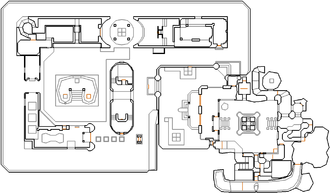 Map of Hatred
Letters in italics refer to marked spots on the map. Sector numbers in boldface are secrets which count toward the end-of-level tally.

Press the switch to lower and grab the super shotgun, then drop down into the first courtyard. Before you do anything, first, get the rocket launcher by taking the stairs upwards and jumping out the window to its platform. Then head for the southeast corner of the courtyard and shoot the barrels around the teleporter here.

Now head for the stairs leading down and take either south or east path. At the end of either path, drop down into the water to be confronted by demons. Head down the canal until a wall with mancubi opens up. There is a small alcove in their closet which is a path upwards. Hit the switch at the end of this path to lower part of the walkway in the courtyard. On the other side are some revenants, so kill them. If the walkway rises up and you are on it, you may have to go all the way back through the canal again. Behind the revenants, you will find the yellow skull key. When you attempt to go back you will teleport to the southeast corner (this is why you should shoot the barrels earlier or you will be trapped behind them). Getting off the teleporter causes several Wolfenstein SS enemies to get crushed, and subsequently resurrected as ghosts, so make sure you have the rocket launcher handy when fighting them. After you are done, use the yellow switch on the south wall of the courtyard to open the nearby door, then head through it, going straight at the fork. Press the switch at the end, looking out for the baron of Hell that appears, then leave this area back into the courtyard.

After your last switch press, go to the stairs leading upwards to find a new area has opened, with several Hell knights at the entrance and some revenants on blocks. There is a BFG9000 in this area. The next switch you need to press is a timed one. The trigger for it is the actual entrance to the new area. Walk into the area and then run northward to the switch which is behind a revenant block. Press it to reveal two walls with cyberdemons. One of them is in front of another switch, press it then head for the southeast corner of this area to find another switch (with a computer area map in front of it). This lowers the walls behind the cyberdemon pens and presents you with a new area.

Your first order of business in this area is the northeastern building. Enter it, and follow the path until you acquire the red keycard. Do not forget to press the switch here either. Now leave the building, taking notice that a lot of monsters are teleporting onto the pentagram as you saw from the red key building. Head for the southeast corner of the big area to find a portal to go through. Look out for the monsters behind the cage, and jump on the platforms until you reach the next building. Enter it, then press the switch behind the wall in front of you. Now make a running jump to the other side of the building, fending off Hell knights in the blood behind the platform with the blue keycard. Use the lift to obtain the blue card, then jump outside to find a lot of monsters again. You now should go to the blue door near the pentagram. Follow the path inside until the top, where if you look out the window, you might notice a bit of the wall you can cross. Sidle carefully along this wall to the other window and enter. Kill the enemies, and jump southward to the other building, following the path to the switch, which raises stairs to the central platform. There are two teleport pads here. Step on the left one to reveal the Icon of Sin, as the right one kills you by teleporting you onto barrels. The pad also reveals several lost souls in the blood. Press the switch in the niche that opens to the south to raise a post on the central platform. Stand on the post and shoot rockets at the brain to kill the boss and exit the map.

In multiplayer, the Icon of Sin will not be present. However, this level does not contain an exit linedef, preventing you from leaving the level in multiplayer gameplay unless a timer has been set through the -timer switch. The Deathmatch Repair File created by Steve Terry adds an exit switch found in the easternmost of the tunnels leading down to the sewer. During single-player gameplay, this exit will be closed off, requiring you to complete the level in the intended fashion. 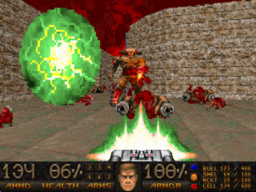 Adam Hegyi duels with a Cyberdemon during rq23-722.