MAP23: Hell's Cavern is the twenty-fifth map of Hell To Pay. The discrepancy between map slot and progression number is because the MAP31 and MAP32 are inserted between MAP15 and MAP16 as part of the regular progression, instead of being secret levels. 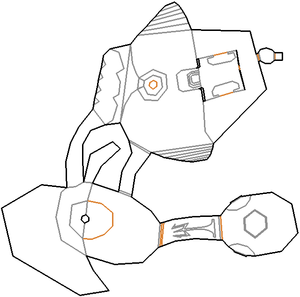 Map of Hell's Cavern
Letters in italics refer to marked spots on the map. Sector, thing, and linedef numbers in boldface are secrets which count toward the end-of-level tally.

* The vertex count without the effect of node building is 308.