MAP23: Hell's Gymnasium is the twenty third map of Perdition's Gate. It was designed by Jimmy Sieben (Evil Genius).

Plot: You're moving into yet another fortified area. Whatever lies beyond must be big, the most valued technology stolen from destroyed cicilizations. 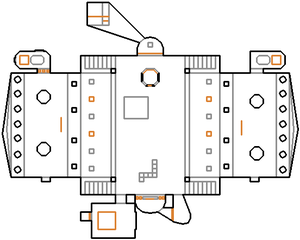 Map of Hell's Gymnasium
Letters in italics refer to marked spots on the map. Sector, thing, and linedef numbers in boldface are secrets which count toward the end-of-level tally.

Pick up the large amount of supplies and head into the arena flanked by two large cages of monsters, many of which will teleport down to greet you. Press the switch on the small tower at the opposite end of the arena to raise stairs up into the cages where you will find the red and blue keys.

Climb the small stairs back near where you entered the arena up to the blue and yellow bars. Open them and press the switch behind them to lower the cages revealing a number of monsters behind them.

Head to the top of newly exposed area on the right to find a small alcove containing a teleporter which will take you up into the small tower in the middle of the arena. Jump off the tower and a wall will open in front of you, behind which is the red key. A cyberdemon and couple of arch-viles will teleport into the arena once you do.

Head to the top left of the arena to find the red bars, behind which is the exit.