MAP23: Hell Prevealed is the twenty-third map of 10 Sectors. It was designed by Yashar "GeminI" Garibzadeh and uses the music track " ". 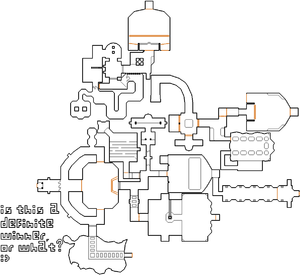 Map of Hell Prevealed
Letters in italics refer to marked spots on the map. Sector, thing, and linedef numbers in boldface are secrets which count toward the end-of-level tally.

Take the super shotgun nearby and proceed, killing the Hell knight and taking the armor. Several mancubi are behind barrels nearby, and after them is a nukage canal. A small path in this canal branches off to the west, so take it for the yellow key, then run through the rest of the canal. At the end, Hell knights guard a switch, which opens two door connecting to the starting point and two arch-viles attack. Waste them, as well as the one hiding, then pick up the rocket launcher and drop down. The wall lowers revealing pain elementals, and approaching the center of the room causes the wall behind you and the one forward to rise up, trapping you in. The switch in the corner lowers them again. Take the teleporter to the next area.

Follow the curvy hall you come across to a room with several doors and a soul sphere. You can open any door, but all of them will open at once, and you should be prepared to fight the monsters behind them. Go through the east door, past the red bars and hopping across each platform. Be careful not to fall off as there is no escaping the nukage here. The arachnotrons, plus an arch-vile or two, guard the red key. Take it and open the red bars you passed earlier. The next room is set up similarly to the pain elemental room from before, only you may fight different enemies (a cyberdemon on Ultra-Violence or higher, Hell knights or barons on lower settings). Again, the switch in the corner lowers the next teleporter.

You will hear a cyberdemon roar in the next area, and will have to deal with cacodemons or mancubi depending on the skill setting. Do not fall into the nukage pit; move around it and use the lift. At the top is a fork, turn right and go north to find the blue key. Afterwards, go south from the fork. The imps guard a door that you cannot open yet, so move across the bridge for now and open the blue bars. In the next room, you will have to jump down into the damaging nukage and hit a switch, which teleports you behind the nukage pool at the beginning of this area. Follow this hall to another switch. This teleports you to a room with a ton of fences. Maneuver through them, but be sure to grab the invulnerability along the way. Use the lift and take out the cyberdemon, then return to the door that was guarded by imps before. A spider mastermind and some arachnotrons will be in the next room, so dispose of them and find the switch to the west. This opens the southern door, where you can cross a bridge to the exit.

When you reach the third area (the one with the cyberdemon and the nukage pool), in the first room, go through the northwest wall for a soul sphere.

It is only possible to get 80% of items on this map, as an invulnerability sphere is in the deathmatch portion of the map, inaccessible in singleplayer or cooperative modes. 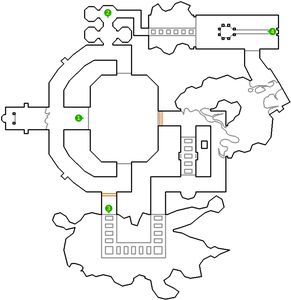 * The vertex count without the effect of node building is 3119.