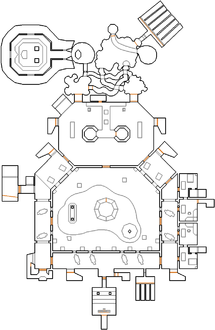 Map of Lunar Mining Project
Letters in italics refer to marked spots on the map. Sector numbers in boldface are secrets which count toward the end-of-level tally.

You start in the southern portion of the map backing the blue exit door. The blue key is placed at the northern cave system. The yellow key is also required on the level and lies in one of the eastern rooms. The central area, which you may glimpse through the windows, requires a red key but is optional.

There are two doors in the room you start in. Both lead to visually identical rooms, but as mentioned above the yellow key is on the eastern side. So, take the eastern door here. In the next room, there are four small doors on the right hand. All they lead to quite similar rooms. You need the third, penultimate, door, but it is advisable to enter all the rooms one by one beginning from the first one, as the shotgun guys within the rooms may shoot you through windows. Take the yellow key in the third room.

You now can proceed further to the north by opening any yellow door. You will locate in a dark room in which there is a red key. This is optional to collect, or if you wish it, climb up on a chair and take it. Anyway, take the lift in the west of the room to descend into the cave. There, turn right and use another lift up. Follow the tunnel straight. Jump over the first and second pits, then drop down into another cave with the nukage river (in case if you fell down into the first pit, turn left not right, jump over another pit and you will be in that the same cave). Cross the river and enter an opening with the blue keycard. Take it. Be prepared for the spawned monsters here. Some of them will also spawn in various parts of the map.

Now, when you have found the blue card return to the starting position and open the blue exit door you were back to when started. Fight everyone in this room (if they are present) and walk through the mountain depiction to end this level.

Six of the seven shotguns are only accessible in deathmatch mode (or by using the idclip cheat), but are not tagged as multiplayer-only.

Getting the red keycard and opening red doors are unnecessary to finish the level.

* The vertex count without the effect of node building is 1594.