MAP23: Melting Universe II is the twenty-third level of Community Chest 4. It was designed by Walter Confalonieri and uses "Countdown to Death," a music track from Doom II by Robert Prince. It is the thematic sequel to MAP42: Melting Universe from 32in24-11: Occupy Doomworld. 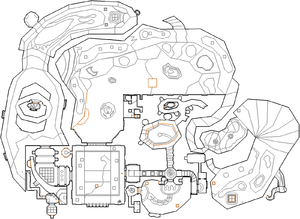 Map of Melting Universe II
Letters in italics refer to marked spots on the map. Sector, thing, and linedef numbers in boldface are secrets which count toward the end-of-level tally.

For a map in the ending stretch of Community Chest 4, Melting Universe II is not particularly difficult to complete, with a relatively low 160 monsters for a medium-sized map and few major traps. However, it does have a few sections that can be challenging, especially near the end.

You begin at one end of a rock canyon. Proceed forward and collect the super shotgun and the surrounding sets of shotgun shells. The first group of enemies consists of four imps and two Hell knights, all facing away from you. Start off by aiming to puncture as many imps with a single blast, then finish off the Hell knights. The fighting may cause two shotgun guys to join the fray from further in the map, so take them down to get your regular shotgun too.

Continue forward into a large cave. Within this cave, there are three more shotgun guys and up to three Hell knights waiting in ambush. Head towards the southeast side of the cave to find a grey brick structure with a wooden opening. Kill the demon inside (four on Ultra-Violence and above) and follow the corridor around to a doorway to an outdoor area, divided in half by a large channel where nukage and water mix. Here, you will find five chaingunners at the far side, as well as four Hell knights, two on the far side and two at the near side (Hell knights not present on Hey, not too rough and below). On higher difficulty levels, you can use monster infighting to reduce the difficulty of this part.

Drop into the slime/water channel and head west into a large open area with red and grey rock ledges, grabbing the chaingun along the way. The ledges are full of tough monsters - large numbers of macubi, revenants and more worryingly, chaingunners and a cyberdemon. To reduce the damage you take, this is your suggested course of action:

You will be teleported back to a chamber in the northwest of the area with the water/nukage channel. Backtrack to the cave and this time go to the southwest side of the cave (west side of the grey brick structure). There is a red door in the side of the brick structure. Go through it to a narrow grey corridor. This corridor is empty of monsters until the end, when you find yourself in close combat with a baron of Hell. Open the door at the end of the corridor to find a chamber with three imps. Beyond the bars in the south, you will find two shotgun guys and a chaingunner protecting the blue key. Kill them first, then go through the door in the east.

Follow the crescent-shaped corridor around and flip the switch in the alcove near the end. Backtrack to the room with the bars. The bars will now have raised. The blue key is now collectable. From here, you can backtrack to the cave. Despite appearances (and your experience with the previous level), there are no traps on the way back to the cave.

Back in the cave, head north and back to the opening in the southeast. A small group of monsters has teleported in - six zombiemen and six imps. As you enter, watch for three small traps near the entrance. Each has an imp waiting in ambush. This group should be no problem, as you have a rocket launcher.

In the area with the water/nukage channel, you will notice that a bridge has appeared, allowing you to cross to the other side. Open the door at the far side to reveal a room with a platform and two Hell knights. Kill them, flip the switch and ride the platform down to a corridor. First, put some rockets into the Hell knight ahead. Next, rush forward to grab the plasma gun and immediately pull back, as you will attract the attention of six nearby demons once you grab it. Mow them down with the plasma gun, then return to the junction where you found it.

From this junction, first head north to a chamber with the yellow key on an isolated pillar. As you enter, watch for two revenants in cutouts in the north wall and a baron of Hell on the nearby ledge (not present on Hey, not too rough and below). Heading further into the chamber, watch for a revenant in a cutout on the southwest wall (present on all difficulties). Drop into the blood (it is not damaging) and proceed into the passage in the northeast. This next area contains one of the level's major traps, so be ready for a tough one.

Heading into this sequence of blood channels, you will first be attacked by a spectre in an ambush position. Further in, you will find a junction. Kill the spectre and baron of Hell waiting in the eastern arm. The berserk pack should be saved for later unless you are at below 50% health. Go back to the junction and head west. You will find a structure, open at the west side, containing an arch-vile - just dump rockets in and it is dead.

At this point, you need to move fast (again). Equip your plasma gun, rush into the structure, flip the eye switch, rush back out and try to get to the entrance of this section as quickly as possible. Within the blood channels, six traps will open, each with a revenant. This trap is deadly if you're not prepared for it. If you can't make it out, just dump plasma and stun-lock the revenants until they are all dead.

Back in the chamber with the yellow key, a rock bridge has risen up allowing you to collect it.

Go back to the junction in the corridor where you got the plasma gun. Detour east to take out some revenants from their perch - this prevents them from harassing and flanking you later. Return to the junction and go south to find a rock staircase leading to a group of four imps and two barons of Hell (one on Hey, not too rough and below). Put some rockets into the group and go through the door they were protecting.

In this next room with a stimpack, a spectre will ambush you from a corridor. Head into the corridor where it came from and equip your plasma gun to take out a baron of Hell in close quarters. The next room has a switch and another spectre in ambush. Flip the switch, then backtrack to the junction where you got the plasma gun. On the way back, you will notice that an arch-vile has appeared at the ledge where the revenants were, so you need to get out of the rock steps area quickly.

From the junction, go east to the revenant ledge and take out the arch-vile. The door there is now open. Head through and down the steps in the north to a small, vine-covered chamber with two Hell knights and a teleporter. Step through the teleporter.

Push the switch on the wall southwest of the yin-yang island, and the new rock outcrop will lower like a platform. Ride it up to the topmost ledge. As soon as you step on the topmost ledge, ten Hell knights (five on Hey, not too rough and below) appear from fake floor traps. This is a nasty crossfire with highly damaging projectiles, so you need to mop up fast. Plasma is recommended, and being able to dodge around monsters is a bonus. Move along the ledge clockwise and slowly clear out the Hell knights as you come to each one. The lava waterfall halfway around the ledge is highly damaging, so don't stay on it for too long!

At the eastern side of the ledge, you will transition into a red tunnel that gradually narrows. At the end of this tunnel, you will peak out into a large cave-like area with a big group of monsters at the far end - ten chaingunners, four Hell knights, four barons of Hell, a revenant and a pain elemental (two less Hell knights and two less barons of Hell on Hey, not too rough and below). Open up with rockets, peak out to lure two revenants (Hell knights on Hey, not too rough and below) waiting in ambush out, then use the entrance to the cave-like area as a chokepoint. Whatever approaches, you mow it down with plasma.

Once the cave-like area is clear, continue forward into the final area of the level. This is a one-on-one duel between you and a cyberdemon. You need to go into the tunnel in the southeast side of this area to flip the switch lowering the bars surrounding the exit. Dodge around the cyberdemon, enter the tunnel, flip this switch, head back out and step onto the green pentagram pad in the south to end the level.

* The vertex count without the effect of node building is 3591.