MAP23: Musical Bar-B-Que is the twenty-third map of 1 Monster. It was designed by Joonas Äijälä (Jodwin) and uses the music track "In the Dark" from Doom II.

Like all maps in the megawad, the map features only one type of monster, in this case the arch-vile. It is set in a dark, brick structure. 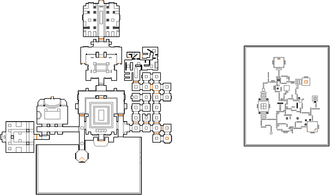 Map of Musical Bar-B-Que
Letters in italics refer to marked spots on the map. Sector, thing, and linedef numbers in boldface are secrets which count toward the end-of-level tally.

In the outdoors area, you need to walk very carefully; there is no way out of the lava if you fall in. You need to press two switches here, one to the north (it is normally blocked by bars, but you removed them by pressing the first lion switch), and one to the south-east. Then escape via the teleporter to the north-east.

To find the red key, leave the room with the teleporter via either of the two doors. In the corridor with three doors to the north, open the eastern one and head through. In this maze-like area, avoid heading through the passages flanked with impaled skulls, as this will trigger an arch-vile ambush. Find a door near the north-west part of this area; it leads to a library. Head north until you come to the blue banner on the wall, then go east. Search the eastern area until you find a skull switch hidden in a nook. The switch opens the wall with the blue banner. Head back there, go inside and press the second skull switch. Now head out of the library and back to the corridor with three doors. This time go through the western door. At the end of the passage you will find the red key, thanks to the skull switch you just pressed.

Go back to the ledge from the beginning of the level and head through the western door again. This time take the passage to the east. At the end of the corridor turn west; descend the stairs (they are accessible thanks to the northern switch in the outdoors lava-filled area), head through the door and claim the blue key. Go back upstairs and go into the room to the north (accessible thanks to the south-eastern switch in the outdoors area). A blue key switch is in this room; press it.

Again head back to the ledge near the start. Now the blue key door to the north is open. Head in, go up the lift and press two skull switches to the west and east to gain access to the red key door. Open the door and press the skull switch at the north end of the room. It opens the exit door which is located at the southern end of the starting area.

In the dark corridor with three doors to the north, behind the middle door is armor and several health bonuses.

* The vertex count without the effect of node building is 2099.

The name of the map was suggested by Robert Eckhardt (Ichor).