MAP23: Oratory is the twenty-third map of 1000 Lines 2 - Community Project. It was designed by Walter Confalonieri (daimon) and uses the music track "Enshrined" by Brayden Hart (AD_79). 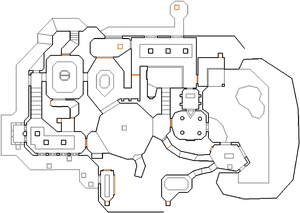 Map of Oratory, cropped to only show the playable area
Letters in italics refer to marked spots on the map. Sector, thing, and linedef numbers in boldface are secrets which count toward the end-of-level tally.

Walk forward to collect a berserk pack, which is guarded by zombiemen and shotgun guys to your right, then head up the stairs until you reach a damaging slime pool - you will see the blue skull key on a pillar in the middle of this pool. Kill three demons that approach from the west then run across the slime (take the radiation shielding suit by the south wall if you need it) and open the west door to reveal a passage with imps and chaingunners. Collect the chaingun and backpack on the western balcony if you need them, then go up the nearby stairs to enter a room with a well - there is a super shotgun here protected by imps (and two chaingunners on Hurt Me Plenty (HMP) skill level or higher. Open the north door and go down the steps to get back outside.

You will find yourself on a walkway that you need to follow south and east, pushing past various enemies that include Hell knights, revenants and arachnotrons. You will eventually reach a small room with an arachnotron guarding a teleporter - enter the teleporter and kill two demons in front of you, then follow the tunnel north-east to a small storage room with two revenants guarding a demon switch. Press the switch then follow another tunnel west and north to find yourself back at the slime pool containing the blue key, which has now lowered - grab it and kill a revenant (or arch-vile on Ultra-Violence and Nightmare) hiding in a closet by the west door, then retrace your steps back to the well room and head east into a neighboring chamber with a water pool.

Go to the south-east corner to find a blue key door (defended by a mancubus on HMP or higher) and pass through it to confront a gang of imps and zombies. Head for the south-east door and open it to dispose of some more imps and chaingunners, then enter the teleporter in the north wall to reach a ledge overlooking the south-west room. You can open the north door here to find a passage leading to the exit switch, guarded by a baron of Hell.

There is another blue key door just east of the slime pool holding that key. After going through the door you can walk north to find an altar holding a megaarmor, or east to go to an outdoor area with a rocket launcher and several boxes of rockets.