MAP23: Order Commons is a level in Strife. It serves as a hub which connects with several other levels. It uses the music track "Drone".

If the Strifeguy chose to trust Macil and destroy the Oracle, they are directed to seek out a factory which is being used to convert people into the Order's soldiers. Strifeguy must meet with Richter, one of the Front's captains, to find out how to gain entry to the factory. 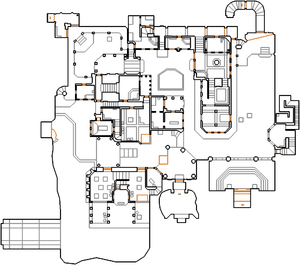 Map of Order Commons
Letters in italics refer to marked spots on the map. Sector, thing, and linedef numbers in boldface are secrets.

Leave the room and turn right to climb up the stairs, then head straight forward to a lift which will take you down to ground level. Head up the steps and go around the wooden building on your left. At the end you will climb some steps to a wooden door. Go down the steps behind it to reach the catacombs.

After returning from the catacombs with the mine key, head towards the factory entrance in front of you but turn right before getting to it. Climb the steps ahead and turn left, then lower the lift which will take you up to the mine entrance. Use the card reader next to the door to open it and head through to the mines.

Once you have collected some degnin ore from the mines and returned to the commons, turn right and walk between the pillars to drop off the ledge. Turn right and drop a piece of ore next to the force field at the factory entrance and use any weapon to blow it up (this will alert enemies to your presence if they have not been alerted already). Open the factory door and head through to its receiving area.

North-east of the gate to the factory, there is a door that leads to a watch room above. The station is equipped with five assault rifles, a surgery kit and a targeter.

After speaking to Richter, if you leave his room and turn right to climb the stairs, at the top you will find a gold-shirted peasant named Timothy. In the original game he will tell you to go away; in the Veteran Edition, if you speak to him a second time he will ask you to collect a blue offering chalice from the factory's manufacturing wing. After bringing this item to Timothy, he will exchange it for a token for the master smithy in the forge.