MAP23: Painful Discharge is the twenty-third level of Icarus: Alien Vanguard, and is set somewhere on Beta Pictoris 3. It was designed by Brian Kidby. 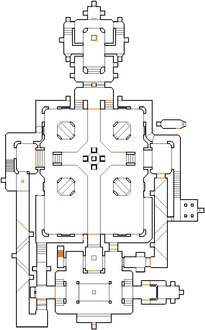 Map of Painful Discharge
Letters in italics refer to marked spots on the map. Sector numbers in boldface are secrets which count toward the end-of-level tally.

Kill the enemies and use either lift to go up. In the next courtyard you see, get the rocket launcher and head for the western set of stairs, then approach the walls for them to open. Take the right one to two switches. Hit the one on the right and return to the courtyard. There is a lift to the northeast that is now open; it is near the bars. Take it up and press the switch at the end of this hall. Return to the courtyard, and just north of the rocket launcher, you will be able to lower the lift to reach the main courtyard. Here, whenever you approach the structure in the middle from any of the four stair sets, an opening in the structure is revealed with a pain elemental coming out of it. From the intersection, head straight north and press the lion switch to reach a symmetrical area. There are several monsters in cages here, as well as some Hell knights and a baron of Hell around. At the entrance of this area, head all the way to the northern part where the caged arch-viles are. Press the switch here to lower the central and side teleporters. The central teleporter leads to the exit, but you need the red key first, so go for the teleporter on the east side of this area. On the other side, take the balcony all the way down the steps to an area with spectres and a BFG9000. Press the switch to acquire the red skull key, then head back to the northern area and take the central teleporter to reach the middle of the map. Head around until you find the teleporter then press the panel furthest to the right to exit.

At the main courtyard, head east then find the lift going downward. Take this lift down and go all the way to the end of the hall to the lift. Take it up and press the switch to not only lower the bars in the first courtyard, but the plasma gun as well.