MAP23: Pathway to Elysion is the twenty-third map of Whispers of Satan. It was designed by Paul Corfiatis, who also wrote the music track for this level, "Spooky". 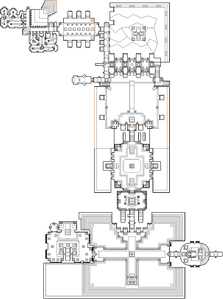 Map of Pathway to Elysion
Letters in italics refer to marked spots on the map. Sector, thing, and linedef numbers in boldface are secrets which count toward the end-of-level tally.

Go forward and pick up the berserk pack at the bend, then head east until you find some imps and a switch to your left. To head into the rest of the level, you must raise seven blocks to bridge your way eastward, and in order to do that, press the switch where the imps were. You now have a total of seven linear paths, each leads to one switch each. Look out for the imps while you are pressing the switches. After you press all seven switches, several imps will teleport in to ambush you. Kill them and head across the seven blocks to the super shotgun, looking out for more imps on the other side as well as cacodemons. Press the switch to reveal a hall of former humans behind you, and then use the lift to ride up. Kill the enemies and go east as much as you can. Flip the switch on the lift to descend into a small room and press the switch behind the lift to draw a bridge leading to the fortress to the south. Head across the bridge to the entrance but look out for Hell knights who teleport in front of you. Enter the fortress and you will notice the yellow skull key in the large room. Go past it to the stairs ahead and open the next door. There are imps on the pentagram in front of you and two visible switches. Press both of them to reveal the side rooms to the south with demons and a mancubus in each room. There is also a switch in each of these side paths, press them to open the central path. Flip the switch to take the lift down. At the very bottom, collect the plasma gun and battle enemies in the walkways over the void here. The switch here has two sets of bars on it, and you need to head into both of the side rooms to get rid of those bars. Take the western door and you will see a switch dead ahead. Head all the way around the counter to press it, then enter the nearby door that opens and press the switch inside there. Take the eastern door after that. Head up either staircase and head across the bridge to the switch. After you press it, press the one in the door that appears behind you, then return to the walkway to access the switch. It has yellow bars around it and an arch-vile will appear in front of you when you attempt to press it. Kill him and press the switch, and then take the lift back up, backtracking all the way to the large room that housed the yellow skull key. After you grab it, head back across the bridge. The exit door should be to the left, so open the yellow door and kill the imps to exit. 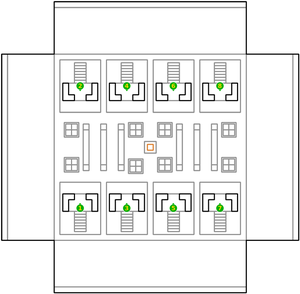 * The vertex count without the effect of node building is 6606.