MAP23: Return is the twenty-third map of 2048 Unleashed. It was designed by Micah Petersen (Jaws in Space) and uses the music track "". 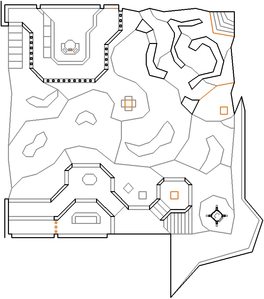 Map of Return
Letters in italics refer to marked spots on the map. Sector, thing, and linedef numbers in boldface are secrets which count toward the end-of-level tally.

Take the shotgun and super shotgun and drop to the ground, then turn right and climb the steps ahead to enter a green brick building with some imps. As soon as you enter, turn right and climb another staircase to a teleporter which will send you to the north-west side of the level which is guarded by various monsters, including a revenant and an arachnotron on Ultra-Violence (UV) and Nightmare (NM) skill levels. Head west and climb up a black staircase to confront a revenant waiting at the top, then follow the path past some shotgun guys and chaingunners until you reach a switch in the north-east corner of the building. Press the switch and head back along the path, climb up a gray staircase that has risen then turn round to see a green step - pressing the switch here will end the level.

Enter the building west of the start point then head west up the steps to find a megaarmor along with a set of red bars, behind which you will find a box of shotgun shells and two radiation shielding suits guarded by an arch-vile. The red keycard can be found on a step in a neighboring room.

After teleporting to the north-west area of the level, follow the narrow walkway north to find a berserk pack.