MAP23: Showdown is the twenty-third level of Memento Mori. It was designed by Milo Casali and uses the music track "Scary 2" by Mark Klem. 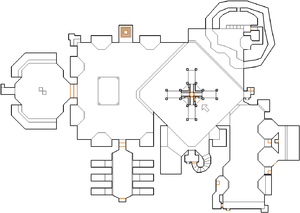 Map of Showdown
Letters in italics refer to marked spots on the map. Sector, thing, and linedef numbers in boldface are secrets which count toward the end-of-level tally.

Phase One: The Warm Up

Gather up all the ammo and weapons on the ledge ahead of you and drop down into the starting area - you'll need it. This map is a slaughter map packing serious opposition.

Your first opposition is three mancubi and two cacodemons. Kill them off and proceed to the southeast corner of the central structure, where an arrow points. Lower the metal structure and ride it up to a pair of switches. Flip both switches. This reveals a new area in the southwest corner, with a mancubus cage and a pillbox containing three revenants and an arch-vile. Your priority should be the arch-vile - dump rockets into the window of the pillbox until you hear it die. Find the staircase next to the pillbox and go up it to enter the pillbox. However, as you reach the top, don't flip the switch yet - head back down to find a new cage in the southwest corner with two arch-viles and two barons of Hell. It is far easier to take them out now than later. Once this is done, go back top the pillbox and flip the switch.

This switch opens up the eastern side of the starting area. As you enter, you will find yourself in the midst of a horde of revenants and mancubi, with a firing line of arachnotrons in a cage in the back. Most importantly, right at the back of the horde of monsters is a cyberdemon. Grab the rocket launcher and all the boxes of rockets, and try your best to get the cyberdemon and arachnotrons to fire at you (and end up hitting other monsters), causing serious monster infighting. You will have to personally eliminate the monsters at the front, but the monsters at the back will get caught in infighting if you do it right, letting the cyberdemon do the killing for you.

Once the cyberdemon makes it way into the starting area, kite it around the central structure while hitting it with rockets for an easy kill.

Proceed to the arachnotron cage. Before progressing the level, it is critical that the arachnotrons are cleared from that cage, since this is where you will be heading to next. Count six dead arachnotrons to make sure that the cage is clear.

Look for the two alcoves in the east with a megasphere and a teleporter. carefully collect the megasphere, then walk into the teleporter. You will end up in the arachnotron cage. Equip your plasma gun, then proceed to the switch at the far end of this room and flip it. The door in front will open, as well as three pillboxes in the east side of this area. Mow down the approaching revenants (seven of them) in the corridor ahead, but stay cautious - some revenants (up to four) are rigged to teleport to the megasphere alcoves, and they may attempt to teleport behind you by using the teleporters in these alcoves.

At the end of the corridor, there is another pillbox with a teleporter. Use this vantage point to finish off the enemies in the pillboxes opposite (especially the two with mancubi - you are teleporting there later). Once the area looks clear, step into the teleporter.

You are now in a corridor linking two of the pillboxes you saw on the east side of this area. Find the switch in the southern pillbox and flip it. This releases a trap in the east wall of the corridor, with five mancubi and four chaingunners. Well-aimed rockets will trivialise this trap.

Once done, step into the teleporter to be teleported back to ground level. If your health is low, grab the other megasphere; if not, you should save it for later.

Proceed to where the cyberdemon was and notice a moat full of imps - try not to fall down there. There is also a raised alcove with three revenants. Clear the revenants out, then jump across the moat and head for the platform with nine bulk cells while mowing down the shotgun guys lying in wait. Lower the metal part of the wall and ride it up to a corridor leading to the raised alcove. Flip the switch inside the raised alcove. This causes a wall in the west of the map to lower, revealing a massive horde of demons lying in wait.

Proceed to the northwest area. 23 barons of Hell are situated in six raised cages sniping at you, a horde of 80 demons is on you, and the central cage contains eight mancubi and four arch-viles. On Ultra-Violence, there's also a spiderdemon to contend with. Your first task is to pull the demons and the spiderdemon away from the cage with the arch-viles and mancubi. This prevents the arch-viles from resurrecting the demons and provides more cover. Pull out the BFG9000 and unload your cells, which should prove highly effective against demon hordes and spiderdemons alike.

Once this first wave is down, restock on your rockets. Your next task is to clear the central cage, and as always the arch-viles have to be killed first. Use the corners formed by the walls in the southwest of the starting area as cover, and fire rockets into the cage until everything in there has been killed.

Technically, you need all three keys to exit. The red and blue keys are in one room, and the yellow key in another. You can grab them in any order.

To get the red and blue key, head to the door in the west of the final open area. When you enter, do not go straight for the red and blue keys. Instead, run to the north side first, where there is an invulnerability. Once you enter, walls on either side will open, revealing a large number of arch-viles. Now that you are invincible, you can safely grab the keys while killing these arch-viles in any way you prefer.

To get the yellow key, open the door in the south side of the final open area. A lone imp stands in the room, with the yellow key at the far end. This room is a trap reminiscent of MAP08: Tricks and Traps's "cacodemon room" - once you fire, ten cacodemons and eight pain elementals will emerge from behind the alcoves in the room. Once done, grab the yellow key from its alcove, along with a megasphere.

Do note that completing this room releases four arch-viles into the level - one from the northwest of the final area, and three from a trap in the area with the first cyberdemon.

Once the violence has died down, head for the north of the final area and raise the three coloured bars. Step into the hole in the floor to exit the level.

When doing episode runs, this is the earliest level in which you can obtain a BFG9000 without losing time. After flipping the switch that reveals the southern side of the level, lower the elevator again, and move quickly to the inner, northwest corner of the "plus," before flipping the switch. A teleporter will be revealed in the east; run into it to grab the BFG, and then open any of the doors and run through to be teleported back. If you are quick, you can telefrag the arch-vile in that room on your way out. All of this can be accomplished before the southern portion has finished lowering.

None of the three keycards are required to complete the level. The blue door is too high to impede your path, and a death slide can be performed by killing yourself with a rocket fired at any of the walls in the exit alcove, with your back facing the portal. Your corpse will slide underneath the red and yellow doors, and into the portal, ending the level. This death slide was first demonstrated in a Compet-N recording in Drew DeVore (stx-Vile)'s 01:46 UV speed run of this level (mm23-146.zip).