MAP23: Spaceswitch is the twenty-third map of The Twilight Zone. It was designed by Paul Corfiatis and uses the music track "Hidden Anger," originally composed by Mark Klem for Memento Mori. The par time defined in MAPINFO is 1:10. 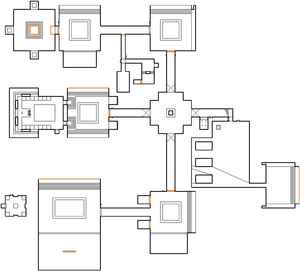 Map of Spaceswitch
Letters in italics refer to marked spots on the map. Sector numbers in boldface are secrets which count toward the end-of-level tally.

To go through this level, you have to flip the right switch in each big room that presents several switches to you. If you flip any other switch, you will have to contend with monsters.

The correct switches to press, in the order of the rooms you go to (and the monsters that appear if you flip any of the wrong switches):