MAP23: The Crucible is the twenty-third map of Doom 2 the Way id Did. It was designed by Richard Frei in the style of American McGee. The par time defined in the DEHACKED lump is 2:15. 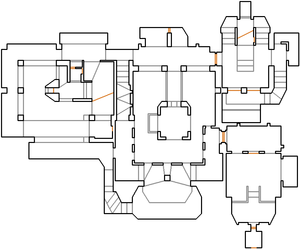 Map of The Crucible
Letters in italics refer to marked spots on the map. Sector, thing, and linedef numbers in boldface are secrets which count toward the end-of-level tally.

Go straight and head left to the extreme west of the map. Walk on the bridge leading east. Press the marble switch to lower the lift. At the top, if you come closer to the another lift it will lower. Drop down when it is lowered to enter inside. Grab the blue skull key. A trap will open. Kill the baron of Hell and press the switch where he was. This will lower the lift again.

Return to the very starting place and open the blue door north east. Walk upstairs and inside press the switch. A trap behind you will open. It also contains soulsphere. Leave by walking downstairs and enter the southern alcove. Head left and walk the stairs. Enter the alcove and grab the red key. Leave this place through the blue door.

Now, with the red key you need to get to the southern side. To do this, from the starting place (north) go west and walk through the corridor leading south. In the south go to the very east. Head left and open the red door. Drop into the lava pool and open the door where you press the exit switch.

Before going straight in the starting structure head left and have a shotgun and its shells.

This level has no official secrets.

* The vertex count without the effect of node building is 556.