MAP23: The Express Elevator to Hell 2 is the twenty-third map of Doom 2 Unleashed. It was designed by Keeper of Jericho and uses the music track "Evil Incarnate" by Robert Prince.

When using the music WAD included with this megawad, this level instead uses the music track "The Challenger" by Paul Corfiatis. 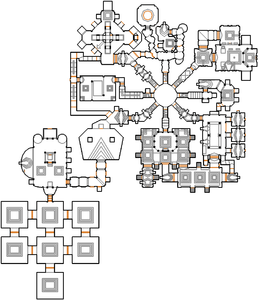 Map of The Express Elevator to Hell 2
Letters in italics refer to marked spots on the map. Sector, thing, and linedef numbers in boldface are secrets which count toward the end-of-level tally.

This level revolves around an elevator which is surrounded by eight numbered doorways at different floors. After opening each floor, watch out for one to three revenants (depending on skill level) that can board the elevator as it lowers and rises.

As the level starts, let the shotgun guy in front of you (or chaingunner on Ultra-Violence (UV) and Nightmare (NM) skill levels) approach you and the elevator will carry you down to the first floor (the north doorway). At the bottom, kill the demon blocking the first doorway (or Hell knight on UV and NM) then go through it to a red tunnel (the doorway will seal behind you). Kill the imps waiting at the junction ahead then turn right and follow the passage to a silver door - watch out for alcoves containing chaingunners that open in front of and behind you on the way. Go through the silver door and turn left to see a switch which will open a bookcase behind you when flipped, revealing a knight (or baron of Hell on Hurt Me Plenty (HMP) skill level) guarding a backpack and a skull switch. Press this switch to unlock the second floor then go back to the elevator.

Go up to the second floor (the west doorway) and kill any remaining revenants, then follow it round the corner and through two wooden doors to a room with one to three mancubi. Walk round the fences to another wooden door and open it to find a lost soul guarding a skull switch, which will open the third floor when pressed. Go back to the previous room to confront an arch-vile - the metal columns by the fences will offer cover from its attacks. Kill the arch-vile then return to the elevator.

Take the elevator up to the third floor (the south doorway) and kill any waiting monsters then go through the tan door to face a pain elemental, plus some lost souls on HMP or higher. Kill them along with any chaingunners visible through the surrounding grates, then press the satyr switch and take the armor and other supplies before returning to the elevator.

Go up to the fourth floor (the east doorway) but use caution - there is a rocket launcher at the end of the passage protected by a caged revenant (or an arch-vile on HMP or higher). Kill it as well as the two zombies in a neighboring cage, then take the weapon and open the marble door. Turn right to kill an approaching baron and some demons, then step into the north-east red teleporter in the next room to enter a cross-shaped structure with an arch-vile. Kill it as quickly as possible then press the skull switch in the middle of the cross to unlock the fifth floor, before heading north into another teleporter to return to the previous room.

Backtrack to the elevator and ride it up to the fifth floor (the north-west doorway) then follow the passage to a wooden door. Open it and kill one or two waiting cacodemons then go through the door behind them to find yourself outside the cross-shaped structure you were in earlier - kill any zombies and other monsters in the area, then go to the south-west corner to see an arrow pointing at a metal wall. Press this wall to lower it, then ride the lift up to a switch which will lower another lift in the north-west corner of the room. Go round to the second lift before it rises and flip another switch here to lower a third lift in the north-east corner, then quickly head round to the third lift (passing a plasma gun and energy cells on the way) and ride it up to the third and final switch. Flip this switch to open the sixth floor and backtrack to the elevator.

Go up to the sixth floor (the north-east doorway) and follow the passage to a silver door, behind which are a number of imps. Kill them then open the large green door and kill two arachnotrons waiting behind it, as well as two mancubi on a ledge above. Go up the steps to the platform that the second arachnotron was standing on to find a switch - this switch opens the seventh floor but also opens two closets on your left and right containing chaingunners and demons. Kill them quickly then backtrack to the elevator.

Take the elevator up to the seventh floor (the south-east doorway) and follow the water stream to a tan door - open it and kill the two waiting mancubi as well as three zombies, then open the large door to the south to find a lift. Flip the switch on your left and ride the lift down to a room with two knights (or barons on HMP or higher) - the blood on this floor is harmful so avoid stepping in it where possible. Go west to a wooden door and open it to reach the ledge overlooking the third floor, then head west to another wooden door and open it to reveal an arachnotron protecting a switch. Press the switch then start backtracking to the elevator, but use caution as each room on the seventh floor now contains an arch-vile.

Back at the elevator, ride it up to the eighth floor (the south-west doorway) and follow the passage to a silver door. Go through it to find a chainsaw then turn left to enter a room resembling the start of Doom II's Entryway. Go through the doorway the top of the steps and follow the hallway to a marble door, then open it to confront two arch-viles on small blocks (the door will seal behind you). Kill them and any zombies and imps sitting in the overhead alcoves, then go round the fenced area in the middle of the room to find a mancubus guarding a computer skull switch. Press it then go back to the fenced area to find that steps have risen allowing you to go inside it - take the megasphere and ammo then press the switch, which will open the wall on your left and reveal a number of imps, cacodemons and knights (or barons on HMP or higher). Kill these enemies and take the supercharge in their alcove, then press the nearby switch to re-open the entrance door.

Backtrack to the Entryway area where a mancubus (or cyberdemon on HMP or higher) has appeared, then return to the elevator where you will find a number of knights, revenants and barons depending on skill level. Take the elevator down to the first floor and go into the red passage then turn left at the junction and follow the tunnel to an open door. Go through it and step on the sky floor to finish the level.

On the sixth floor, you will come to a square room with two large doors. Go through the silver door and kill one or two barons waiting round the corner, then open the tan door behind them to find two mancubi guarding a switch. Flipping this switch will reveal a megaarmor in the middle of the floor below.

* The vertex count without the effect of node building is 4618.

This level is inspired by The Express Elevator to Hell from the Master Levels for Doom II.

Past doorway #8 is a room that resembles the entrance area from Doom II's Entryway. The rooms following it are loosely based on other areas from this level.