MAP23: Tombstone is the twenty-third map of The Plutonia Experiment. It was designed by Milo Casali and uses the music track "Bye Bye American Pie" from Doom II (the same as Doom II's MAP23: Barrels o' Fun). 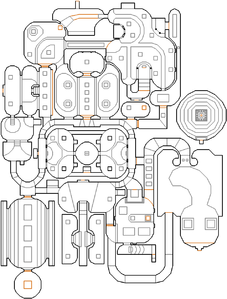 Map of Tombstone
Letters in italics refer to marked spots on the map. Sector, thing, and linedef numbers in boldface are secrets which count toward the end-of-level tally.

The teleporter leading to the exit chamber only requires the blue and red keys, but the exit chamber also contains three barriers that need to be lowered by corresponding keyed switches around the map.

You begin in a circular room with two exits facing west, and will immediately come under fire from imps and shotgun guys on both sides. Grab the super shotgun and BFG9000 in the starting room then go through either exit (watching out for revenants in niches behind you) and head straight forward through a brick doorway to an oval corridor, then go round to the north side of this corridor to find some health bonuses opposite a door with light strips on either side. Go through the door and walk forward, watching out for revenants that rise from the pillars on either side of you, then open the next door to find the blue skull key being guarded by barons of Hell, revenants and Hell knights.

Return to the oval corridor and follow it round to a room on the south side, which contains various enemies as well as a few barrels. Look at the north wall to see a skull switch between two blue banners and press it - this is one of three switches needed to open the exit teleporter.

Follow the oval corridor round to its north-west corner, then head north along a hallway until you reach a blue key door. Open the door and kill the imps, cacodemon and pain elemental behind it before stepping through - a plasma gun will rise from the floor, which you can use to kill the revenant that appears on a nearby pillar. Head east along a tunnel containing shotgun shells until you reach an outdoor area with bridges over a damaging blood pool that is infested with enemies, including demons and spectres that rise from the blood; you may want to step back into the tunnel to force them to attack from one direction.

Follow the bridges to the south-west corner of the room with some health bonuses then go round the corner (remember the skull switch here for later) and up some steps, where you will see a lever rise from the floor. Pull it, then drop to the floor below and follow the bridges to the south-east corner, go through the doorway here to confront a knight then head north up a narrow passage to find a couple of revenants guarding a lift. Flip the switch here to lower the lift and ride it up to the yellow skull key.

Return to the hallway with the blue key door, then go through the doorway between the windows in the west wall to see a skull switch straight ahead of you behind some barrels. Press this switch to open the second barrier in the exit room.

Return to the room with the blue key switch, then go to the south-east corner to find a yellow key door. Go through the door and fight your way past some revenants then follow the corridor round until you reach a large room with various enemies and a large blood pool (which is not harmful) running through the center. Enter the blood and walk south between two columns to see a skull switch ahead, but arm yourself before pressing it as the columns will lower to reveal six revenants and two arch-viles; get back into the corridor you used to enter the room and use it as cover.

Pressing the skull switch opens a pair of bars blocking a doorway on the north side of the room, allowing you to go through to a curved passage. Follow it round until you see a damaging blood pool below containing the red skull key along with two pain elementals; destroy them then drop into the pool, kill a mancubus that appears to your right then take the key and use the teleporter on the east side of the room to get back to the ledge you dropped from. Head north until you see a doorway on your left, go through it and walk through the door here to return to the east side of the oval corridor.

Return to the area with the bridges in the north-east corner of the level and go to the south-west corner, then walk through the doorway here to find a skull switch between two red banners - this is the final switch needed to reach the exit teleporter.

Go to the south-west corner of the oval corridor and open the blue key door here to find a wide hallway containing cacodemons, spectres and a pain elemental. Push past them and open the red key door at the other end of the room to find a large teleporter leading to the exit chamber. If you have pressed all three of the switches flanked by banners, then the exit teleporter will be accessible; step into it to finish the level.

This level can not be played in deathmatch, because there are no deathmatch starts. This bug is not present in an alternate version of PLUTONIA.WAD found on GOG.com and a specific version of the id Anthology.