MAP23: Tower of Babel is the twenty-third level in the Ultimate Doom episode of the PlayStation and Sega Saturn versions of Doom. It is a console conversion of E2M8: Tower of Babel, original authored by Sandy Petersen. Unlike its PC version counterpart which occurred in The Shores of Hell, this level serves as the ending of Inferno, replacing E3M8: Dis.

This level should not be confused with the level of the same name which was present in earlier console ports; that level appears instead in the PlayStation and Saturn ports of Doom as MAP16: Hell Gate. It is preceded by MAP22: Limbo and is followed by MAP24: Hell Beneath (which is a part of Thy Flesh Consumed). There is no text screen after completion of the map.

It features a boss battle with the cyberdemon. Aside from having the cyberdemon and lost souls, the map also features optional-to-kill mancubi on higher skill levels. 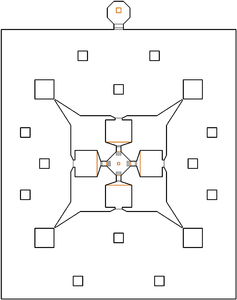 Press any of the four switches in the starting room to raise staircases leading up to the hanging corpse walls, which will open like doors when approached. If you are playing from a pistol start it is advisable to press the west switch to raise the east staircase, as the east room contains a rocket launcher and four boxes of rockets. The doors from the starting area will close when you step into the rooms beyond them.

Whichever room you enter, head outside - the cyberdemon is waiting in the north-western corner of the outdoor area. Battle it any way you see fit, staying on the move to avoid its rockets. The lost souls in the area are more annoying than dangerous, but on higher skill levels you will also have to contend with mancubi. They may distract the cyberdemon by a short time if they hit the demon with their fireballs, or get hit by its rockets.

Once the cyberdemon is dead, a metal barrier in the northern outer wall will open. Head over to it, and step on the white teleport pad behind it to finish the level.

* The vertex count without the effect of node building is 192.