MAP23: Trinary Temple is the twenty-third map of Ancient Aliens. It was designed by Pinchy and uses the music track "The Greater Good," composed by Stuart Rynn (stewboy). The par time is 20:00. 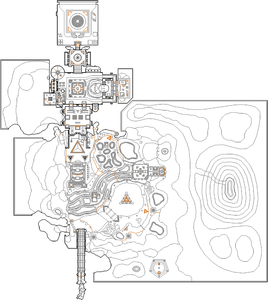 Map of Trinary Temple
Letters in italics refer to marked spots on the map. Sector, thing, and linedef numbers in boldface are secrets which count toward the end-of-level tally.

Six chaingunners that are meant to teleport in after the raisable bridge is crossed may never do so, depending on the source port. They fail to teleport in Zandronum 3.1 and GZDoom versions older than v4.3.1 unless the option compat_pointonline is set to true.

* The vertex count without the effect of node building is 18776.